If Book Slam has been the capital’s best literary nightclub for practically a decade, bringing together a talented cenacle of poets, authors, comedians and  songwriters to tickle to tastebuds of London’s logophiles, then it’d seem School Dinners plans to be the full course.  It’s been created by the same team that has made Book Slam such a hit, so similarly,  it also involves a line-up of interesting people who provide the thought-provoking entertainment.  But  there’s food in the mix (hence the name) , and to make it all the more immersive, it’s served in the school auditorium of a boys school in Shoreditch once attended by Reggie Yates and Trevor Nelson (how’s that for kudos?).

Throughout the night, we spot waiters dressed as teachers,  order drinks from menus printed on ruled paper, watch classical “assembly” performances and  notice other wry references to those wonder years – yet the school setting is a minor novelty. The “dinner”, for instance,  is a fancy four courser featuring modest yet delicious dishes like salmon tartare and beetroot, (the starter) and chicken with elderberry glaze served with squash puree, kale and sorrell (the main).  Even the green apple sorbet ice-pop cleanser was a worthy prelude to the  chocolate brownie and plantain ice-cream that finished off the meal – so on the food front, School Dinners was delightful. 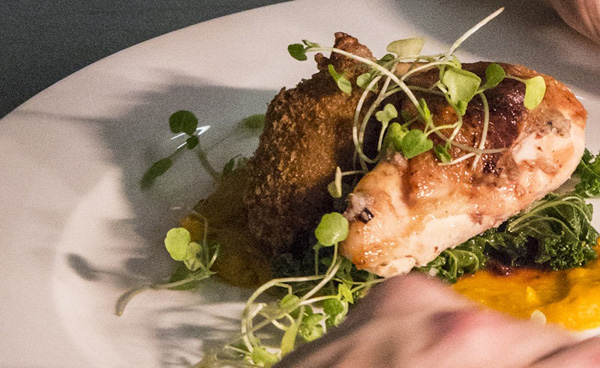 The entertainment had its highlights too.  Run Dem Crew’s Charlie Dark was a brilliantly sharp host,  prepping the stage for engaging performances from guests such as poet Mark Grist and singer-songwriter Eska.  However, ‘Bad Pharma’ author Ben Goldacre’s rapid fire monologue on the subject of drug trials might have been 10 minutes longer than necessary, while Sophie Heawood’s celebrity interview anecdotes – as funny as they were –  might have worked better at a dinner party for likeminded peers. Still,  all this is forgivable for a debut event which is not only a great concept, but with a few tweaks, might be in line to becoming the next best night in the capital.

What we’ve been up to… Eat Your Way Around Brixton