Switzerland has invaded England. Right in the heart of London, Verbier has set up a remote colony in the midst of the hustle and bustle of Leicester Square at the W Hotel. Until November 9, the hotel is celebrating the launch of a new sister property in Verbier. With winter just around the corner, many people are starting to shift their fantasy landscapes from beaches to ski slopes, so there’s no better time to stop by the W to experience a little taste of Swiss hospitality. 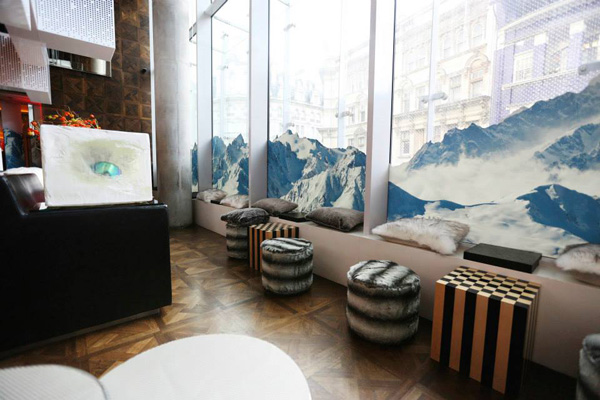 Step inside and you’re greeted by a ski gondola that’s found a new life as an interactive photo booth. After smiling for the cameras, you’re whisked up to the W Lounge and Library where you’ll find warming fires and cozy furs draped everywhere. Skip the skiing, and go straight to the bar for some après-ski drinks crafted especially for the Verbier experience. Among the ten new cocktails are  unique cocktail ingredients from Verbier’s three alpine neighbours, Germany, France and Italy. A menu curated by the W Verbier’s Culinary Director, the two-star Michelin chef Sergi Arola is available to accompany the drinks.
After you’ve warmed up inside and out, head over to the W London’s screening room and catch one of the  ski-themed movies showing, ranging from the Bond flick On Her Majesty’s Secret Service to a young Robert Redford doing all of his own skiing in Downhill Racer. And if you’re there during the last four nights of the takeover, head over to Wyld for W Verbier’s Search of a Resident DJ competition. Six DJ’s will be spinning and competing to land the gig as the W Verbier’s resident DJ. Events continue until November 9th  and are free to the public. (Words: Barbara Cole)

What we’ve been up to… a weekend in Paris

What we’ve been up to… Cottons

Somewhere you should go… Toast and Roast

All eggs everything at Egg Break in Notting Hill

Somewhere you should go… The London Coffee Festival