Somewhere you should go… Baketopia

As a child, you were probably told not to eat too many sweets and cakes – adults seemed armed with hundreds of reasons – from tooth decay to ruining your dinner – to keep dessert from you. One of the most elaborate and persuasive lessons in this came from two ordinary German school kids named Hansel and Gretel. These two got a chance to visit every kid’s fantasy house: one made of cakes and sugar and candy. Of course, trust grown-ups to transform Hansel and Gretel’s fantasy land into a horror story where eating sugar-paned windows results in near-death. 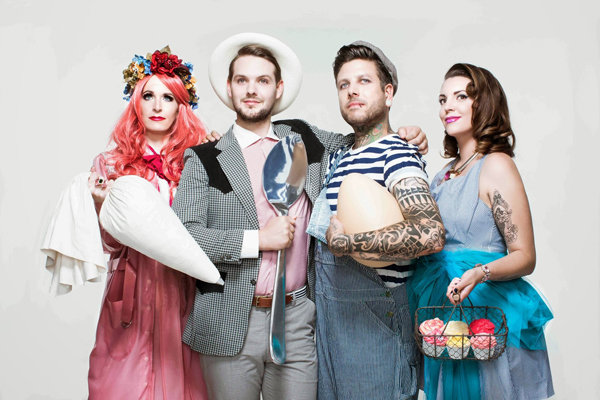 The upcoming pop-up Baketopia has decided to cure those fairytale-inspired nightmares with a two-day event where you can eat everything, without a carnivorous wicked witch in sight. Held to launch National Baking Week, Baketopia is a fully-edible magic meadow set in Kingly Court just off of Carnaby Street. With 3,000 pieces of baked goods to be eaten over the weekend, even Hansel and Gretel would be overwhelmed with the selection. Some of the contributors featured are Miss Cakehead, the Tattooed Bakers, Nevie Pie Cakes, the Conjurer’s Kitchen, and John Whaite, the winner of last year’s Great British Bake Off. When you enter this edible wonderland, you’ll have to choose which bits to break off first. Will it be some meringue mushrooms from the meadow? Harvesting carrot cakes from the field? Netting some pastry butterflies? Or dunking some frog cookies into the fountain? Whatever your stomach catches, make sure to visit the centerpiece, a massive unicorn formed of rainbow cake and edible gold leaf embossed hooves. (Words: Barbara Cole) The event takes place from 12pm-7pm on 11th-12th October…or until the goodies last! Guests are asked to donate £2, which will go toward the Great Ormond Street Hospital Children’s Charity. Priority tickets are sold out, but you can turn up on the day. For more info, visit: misscakehead.wordpress.com/2013/09/10/edible-pop-up-baketopia/

Somewhere you should go… The London International Ska Festival

What we’ve been up to… La Porte des Indes

Something you should do… Edible Cinema