If you’ve been flicking through my Insta feed of late, you’ll notice I spent the last part of February in Tokyo. It’s a city I’ve always wanted to visit for as long as I’ve been hip to bento boxes, Sony tech, Muji, Uniqlo and Streetfighter’s Ryu (what a bae, eh?). And of course, Lost in Translation. I was out there to run the Tokyo Marathon, but the city itself was quite an eye-opener. Here’s nine things I learned from my trip:

No lie: this is the best ramen I’ve had in my life. So cheap too 😍 #tillyinTokyo #photography #iphoneography #japan #vacay

Every London street needs an Izakaya

“Izakayas” are these cosy eating and drinking spots that seat like, eight people (?) max – and you can expect to get some of the most delicious food that costs next to nothing. On the night of my arrival, the friends and I visited one not far from our AirBnB for a piping hot bowl of ramen and gyoza on the side. Total cost? Six quid!

I know there were others in town, but they were few and far between (but when I did see a fellow sista, we gave each other that look and nod that basically meant “Black lives DO matter even if we’re in the minority right now. Keep ya head up”). Still, I didn’t catch a whiff of racism and figured if I dropped the name “Kobe Bryant” in all conversations, the Japanese would appreciate I knew their love for US basketball, America and the sixth largest city in Japan that produces some really tasty beef.

Plus, when you’re probably the only Black American Woman running a marathon, people WILL notice you, like this kind chap:

@megerecooper I don’t know you, but you looked elegant so I took these photos. pic.twitter.com/4rFAinQRPF

I’m kind of fat in Japan

I was very happy to discover the biggest Uniqlo in the World is in Tokyo. It’s one of my favourite clothing shops, and I’m well aware that I have to pick up most items in a Medium or Large. Not so in Japan. I could only fit in XLs, which my self-esteem didn’t like very much.

The first (and last) time I’ll have sushi (including “sea urchin”) for breakfast… 👀 tasted good though 👍🏾 #daiwasushi #tillyinTokyo #iphoneography #japan #vacay   A photo posted by Matilda (@megerecooper) on Feb 22, 2016 at 6:31pm PST

We all know proper sushi is raw. But in the UK, restaurants aren’t even allowed to roll like that, so even if your sashimi or nigiri looks and feels quite fleshy, it’s been prepared in a way to remove any remnants of life for the sake of our health. Yet when in Tokyo, you get the raw deal. And you know it’s raw. Why? Because you’re eating it in a fish market, at 8am in the morning, because that’s the time you will have the freshest fish that was probably caught 30 minutes before you sat down and ate it. Let’s just say it was an… experience. A tasty one to be fair, but  I had to give up on the roe aka “baby Nemo” maki. That’s just going too far now.

Google Maps is my ride or die

The only time I got lost in Tokyo was when my phone died. Thankfully, the good people of Japan that evening went so far as to map out the way to get to my destination (one guy in a shop actually disappeared for 20 minutes to find a computer to print out a map for me, bless him). But even with three maps in my hand, I still struggled to find my way. Never will I underestimate Google Maps again.

Insane in the membrane #takashimurakami #contemporaryart #culture #tillyinTokyo #japan #vacay A photo posted by Matilda (@megerecooper) on Feb 24, 2016 at 12:57am PST

The city is demented and blissful in equal measure

I saw some very strange things out there, not least the Takashi Murakami exhibition at the Mori Art Museum. But that was an intentional kind of weird. On other days, I’d find there was alot going on beyond the city’s flashing neon lights, Hello Kitty references and the occasional spotting of a Harajuku girl.  I walked into one shop that looked and sounded like it had a serious case of ADHD. Thank God I was only looking for KitKats, so I could get out of there quickly (speaking of: I brought so many different flavours back home like Strawberry Cheesecake, Green Tea and even Sweet Potato!). But on the flipside, you can walk through an area like Ueno where all calm is restored. How odd. Or as my friend put it: “bi-polar”.

I need some Japanese friends in my life

I’ve travelled to many places in my time, but this is one of the few occasions I’ve felt so welcome. And I liked a lot of their customs – like offering wet cloths at restaurants, the humility of bowing, the meticulous approach to everything or the habit of wearing sterilised masks to protect us from their germs (and here’s me thinking they were trying to protect themselves from us).

Everyone should run the Tokyo Marathon

The organisation, the crowd support, the route (for the most part: there were four nasty inclines at the end, boo!) – I’d give it a ten out of ten. And you get a very lovely medal! Plus, the “Japanese Run Dem Crew” AFE Tokyo hosted a “Bridge the Gap” weekend for all running crews coming in town for the race, and it was great to meet them. 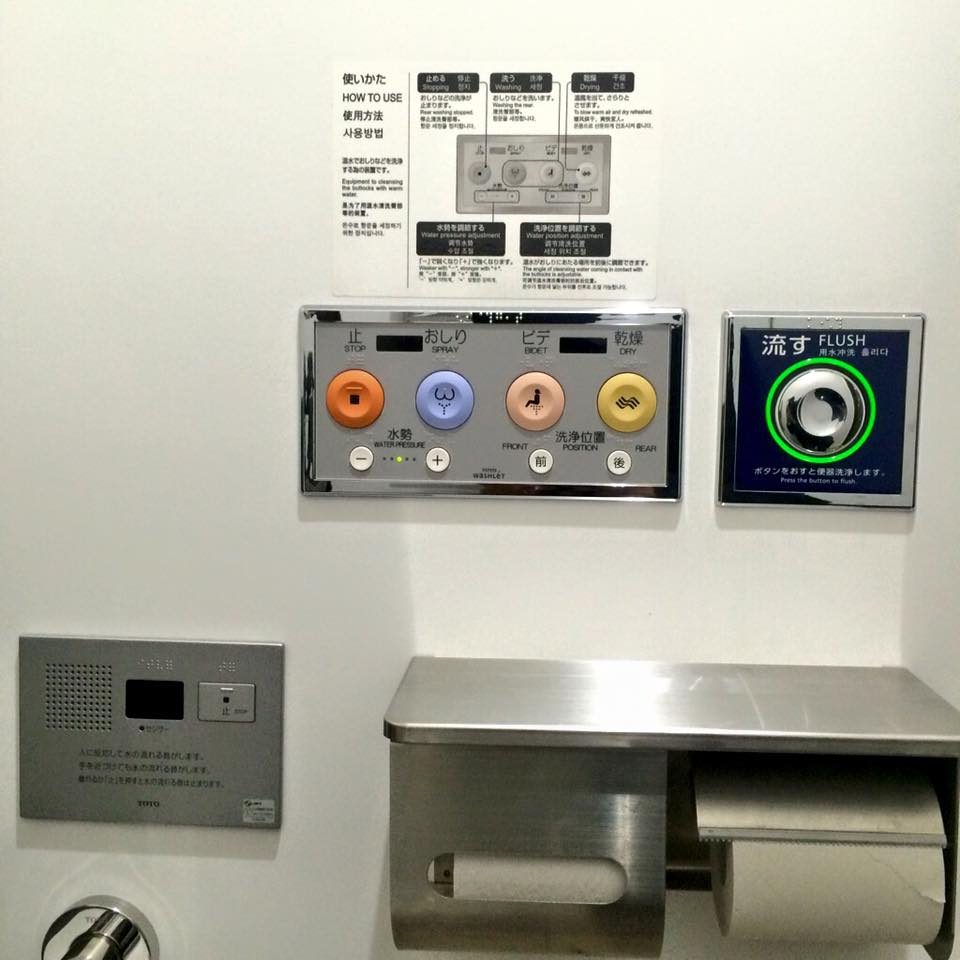 And finally: Tokyo has some kickass toilets (that can actually clean ‘that ass’)

I’d heard the stories and seen the photos but seeing one of these superloos in real life was one of the highlights of my holiday. No matter where I was, every time I had to go, I was met by a mechanical contraption that appeared to take pleasure in my personal waste disposal. But really,  the pleasure was all mine.

Have you been to Tokyo? What did you like about the city? What drove you mad? Let me know in the comments!