Somewhere you should eat… Shrimpy’s at Kings Cross Filling Station

Think of petrol station food and what springs to mind?  Ginsters, day old pastries, and tea from a machine – and that’s if you’re going for the higher end of the scale – a step-up from the standard groceries, overpriced confectionery, and the wide Pot Noodle selection?  As venues go, they are the complete opposite of culinary, food-as-fuel being the more dominant philosophy. 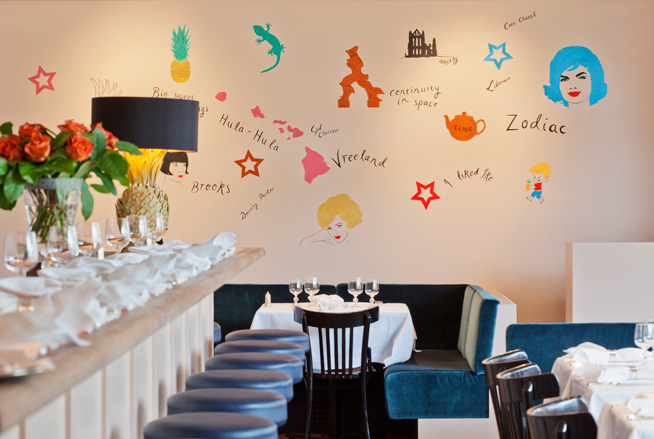 Which makes new opening Shrimpy’s restaurant something of an anomaly, located as it is at The Filling Station, a former BP garage overlooking Regents Canal. Sat at the back of King’s Cross station, it’s visible from the road but gives no indication of what lies beneath (except for the neon green signage reminiscent of some lonely American diner, which is itself a sort of clue). The restaurant is run by the guys behind Bistrotheque, who commissioned architects Carmody Groarke to turn the space into a semi-permanent structure, replete with fibreglass walls whilst artist Donald Urquhart’s drawings adorn the walls of the dining area.

The food itself draws on influences from all corners of the American continent, with a menu featuring corn chowder reminiscent of the Deep South, ceviche, a Peruvian favourite, and a twist on the hamburger, replacing with the usual beef with soft shell crab, legs and all. As the name implies, the rest of the menu is heavy on the fish, with octopus, monkfish and lobster so strict vegetarians might not be best pleased. But, for everyone else, it’s way better than a Ginsters.

What we’ve been up to… Stories, Broadway Market

What we’ve been up to… Murakami

Somewhere you should eat… Heaton Butler and Bayne