Half-way into January and still feeling sluggish? Time to head to Holborn, where private gallery DOMOBAAL is showing new works by Sharon Kivland designed to stimulate our conscious and unconscious minds.

Artist-writer Kivland is a Research Associate of the Centre for Freudian Analysis and Research in London, and Freudian theory permeates her thinking and shapes her work. In her series at DOMOBAAL, Kivland focuses on concepts of memory, unconscious desire, repression and the Uncanny. She draws upon a personally collated archive of postcards, magazine clippings, advertisements and prints, cropping them at unexpected angles, re-painting them and making laborious copies in carefully rendered pencil drawings. The impact of these alterations on the way the images are perceived is discussed in two new critical essays of Kivland’s work, written specifically for the exhibition and on show in limited-edition bound volumes. 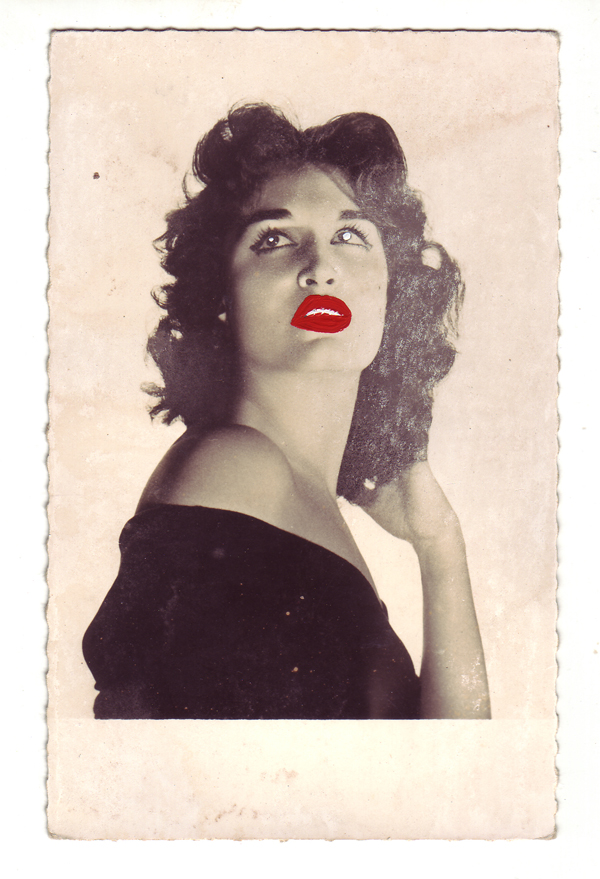 One of these discusses Kivland’s work in terms of the Uncanny. At once disturbing and alluring, the female is ‘always seductive and sublime, and yet ugly, beguiling and unsettling’. In her Les Vedettes series, Kivland alters picture postcards of flawless, sleek-necked stars of the silver screen by crudely brightening their teeth and eyes with flecks of gouache. ‘The postcards are slowly fading’ Kivland tells TCé. ‘One day (I imagine), only the lips and highlight in the eyes will remain.’ A haunting thought.

Also look out for Kivland’s The Unconscious is a City, in which the artist has applied swathes of gouache in greyscale to rarely found 1950s picture postcards of Rome. Although irrevocably altering the image, Kivland keeps to the contours of the picture and the documents retain a visual memory of their original content. The series make for a wonderfully clear visual analogy for one for Freud’s lesser-known (and not fully formulated) theories of Rome as an analogy of memory, where past and present co-exist. However, they also encourage us to take a position as to the aesthetic decisions actioned by Kivland – are her rough daubings of paint the traces of a destructive, anarchic, even iconoclastic act? Or might they suggest a process of reincarnation, as Kivland retrieves an otherwise rather forgettable image from the confines of the archive? Time to get thinking. (Words: Florence Ritter)

What we’ve been up to… Coal Vaults

In pictures: Jeff Koons at the Newport Street Gallery