Tucked away in Westbourne Park – over the foot bridge, past the skate park and under the Westway – lies the much famed Supperclub: ‘a special place where people can let themselves go’ – and in the world of alternative dining experiences, its reputation proceeds itself. The West London venue regularly gets taken over by famous chefs and under new themes – so what did Pan Asian Ian Pengelley (probably the only man in the world who has taken on Gordon Ramsay and survived) bring to the chaos and freedom loving crowd at this Supperclub on June 8th? 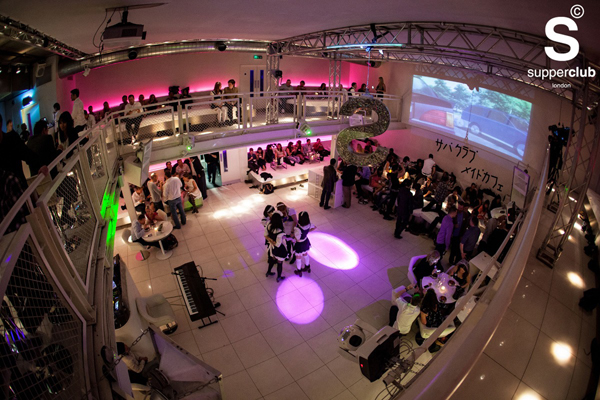 First and foremost, the food was other worldly which each course looking and tasting like a top class dish. Even though I was horizontal on a white bed with booming music I could quite easily have closed my eyes and been in a Michelin-starred restaurant. It consisted of Tom Kha coconut soups, “smoking sushi”,  soy marinated sea bass. But Supperclub isn’t just about the food. There is themed entertainment while you chow down, and this time with the  Japanese Maids Café of Akihabara, Tokyo. Having experienced the real McCoy in Tokyo, I had high expectations. Although the lack of interaction with the audience let them down a bit (there was no in you face screaming and extreme cuteness), they still managed to create something of the surreal and funny experiences that I remember. An aerial acrobatic performance caught the audience’s attention and seemed more like the extreme Supperclub you would expect.

The night was a great opportunity to let my hair down. It may not be the Amsterdam style debauchery and underground vibe it was of  yesteryear but considering the amount of people dancing, laughing and oohing over the food, it was still pretty special. (Words: Laura Thornley)

What we’ve been up to… Murakami

Somewhere you should go… Free Speed Listening at Queen of Hoxton