Something You Should See….Susan Hiller: Channels at Matt’s Gallery

“I was vacuumed upwards at a great velocity…I couldn’t feel my weight at all…I could see the horizon clearly as if some curtain were lifted…We don’t have the vocabulary to describe what I felt.”

Curious? Who wouldn’t be? At East London’s Matt’s Gallery this month, these otherworldly accounts are the material for Channels, a new audio-sculptural installation by Susan Hiller. From a large wall of flickering television sets-on-standby, various disembodied voices describe – or try to describe –their encounters with the Other, in their accounts of Near Death Experiences (NDEs). 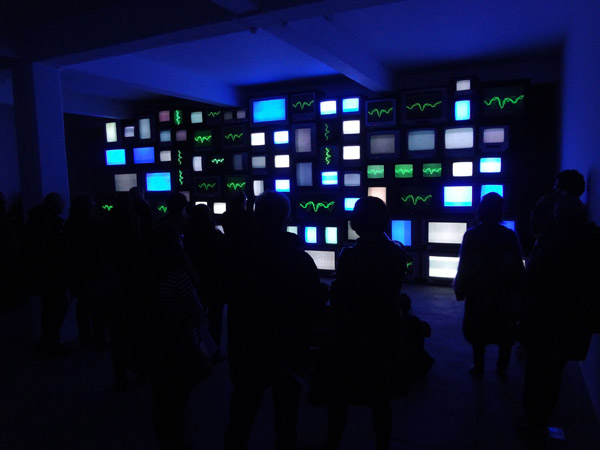 In between these short narratives, there are relatively long periods of quiet in the concrete space, with only the familiar crackling hiss of white noise coming from each of the television sets. Visitors sit and watch the blank screens expectedly, as if waiting for a technical fault to be resolved. When a single voice does speak out, it punctures the toneless white noise with bright clarity. But it is joined by other voices, which, rising together, begin to babble over one another. We find ourselves struggling to hear, grasping after the individual voices and wanting to understand the significance of what it is exactly that they are describing.

There is no harmonious scientific explanation for NDEs. Although the speakers featured in Hiller’s work come from locations across the globe, they are united in their faltering attempts to express the definitively ineffable. The imagery they use contains certain recurring motifs: bright lights getting brighter, a sudden warmth, a sense of floating, a draining away of any feelings of pain or fear. This repetition is not entirely unexpected, as this kind of imagery has seeped sideways into our cultural language, in spite of the mixed reception of NDEs. Hiller is interested in the marginal, things we consider trivial or don’t take seriously, and she is fascinated by unexplained phenomena.

This is a piece as much about everyday earthly life as it is about anything in the ether. Hiller’s piece doesn’t offer any judgement as to the level of ‘truth’ behind the NDEs but simply presents us with them as an aspect of human experience. They are for Hiller cultural artefacts, or ‘social facts’. Are they visions of truth, bewildering misperceptions or straight out delusional? It doesn’t matter. Channels is a portrait of a rare phenomenon which depends upon personal testimony and eschews empirical investigation. Indulge your imagination and open your mind. (Words: Florence Ritter)

Susan Hiller: Channels at Matt’s Gallery is on until April 14th. For more info visit: www.mattsgallery.org/artists/hiller/exhibition-4.php

Something you should see… The Soul of Flies

Something you should see… Casablanca: The Gin Joint Cut

Something you should see…Broken Lines

A flash rave and multi-art: my weekend in pictures (January 30th)

Something you should do…Contemporary dance