The Roundhouse is silent, except for the murmuring of a few visitors and the shuffling of feet. Instead of the floor being packed with concertgoers or seats for the latest performance in the round, a few dozen people are milling around, their faces turned upward. They stand and stare, occasionally breaking their gaze to glance over at a traveling companion. Instead of a performance on stage in the Main Space, visitors are appreciating the Roundhouse itself, as it is featured in the new commission “Timepiece” by noted  artist Conrad Shawcross. It is a large-scale light and mechanical installation that uses the ceiling and walls of the Roundhouse to depict a faceless clock. The clock’s three hands keep to the actual time, and it uses the 24 supporting beams of the Main Space as half-hour markers. 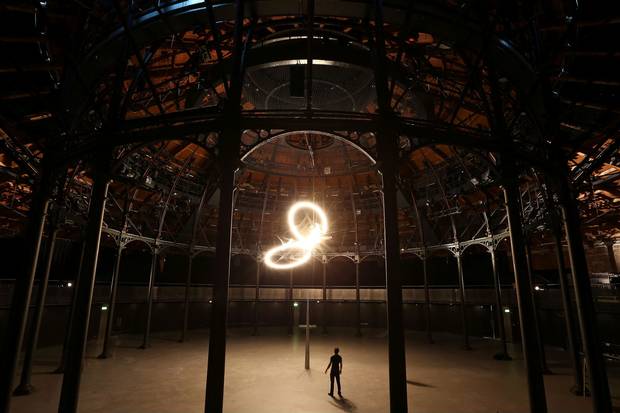 For those wanting to add to the experience, the Roundhouse will be featuring various artists performing in conjunction with Timepiece. Choreographer Wayne McGregor has put together a series of dance pieces to coordinate with the Timepiece. Siobhan Davies Dance will take a different angle and feature dancers that manipulate time. The London Contemporary Orchestra will also feature a sound-walk that begins in Primrose Hill and then travels to the Roundhouse all while performing KLANG Die 24 Stunden des Tage (The 24 Hours of the Day). The programme will allow the audience to experience the hours of the day through sound, taste, smell, and visual perceptions. The Roundhouse will also host two Live Lates nights, with the first one on August 8th featuring spoken word and electronica, and the second one on August 15 which features circus dance performances from Iona Kewney and Joseph Quimby.
Admission is pay-what-you-like, and it closes on  August 25. For more info, visit: www.roundhouse.org.uk/conrad-shawcross-timepiece

Somewhere you should go…The Genius of Hitchcock at BFI Southbank

Somewhere you should go….Origins: Festival of First Nations