A guide to the 57th BFI London Film Festival

After a run-of-the-mill summer movie season, autumn really needs to start with a bang. Thankfully, the 57th BFI London Film Festival (9-20 October) is more than up to the task. As you will see from our guide to the highlights of this year’s festival, the LFF has assembled its strongest line-up in years. From Hollywood A-listers to exciting new talents and from hopeful Oscar contenders to little films with great heart from countries such as Nigeria and Lebanon there is something for every film lover in this twelve days celebration of the magic of cinema. As tickets go on sale today at 12pm, here are our top picks:

While many Hollywood stars (Sandra Bullock, Joseph Gordon-Levitt, Carey Mulligan, Daniel Radcliffe to name but a few) will grace the red carpet with their glamorous presence, the spotlight of this year’s festival will fall on Tom Hanks whose two latest films  – Saving Mr Banks and Captain Phillips – have been chosen for the opening and closing night galas. It is fair to say that the two-time Academy Award winner has been unlucky with his recent film choices, Captain Phillips  though is set to be his great comeback. With an intriguing plot based on the 2009 hijacking of a US container ship by a crew of Somali Pirates and director Paul Greengrass –  who offered us the sublime United 93 the last time he dealt with a real-life hostage crisis – the film has all the potential to become the rarest of gems: a thinking man’s high- stakes thriller. 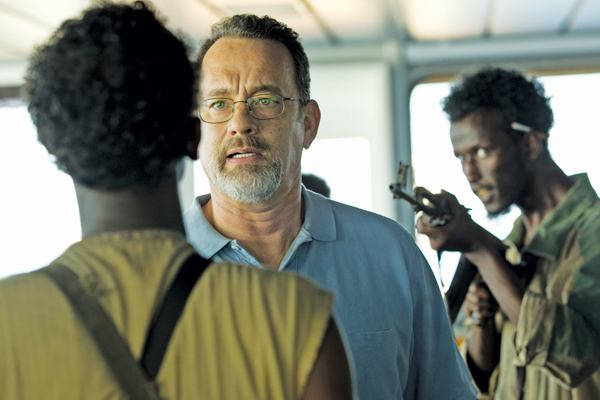 Who could resist a double-bill of the latest films of two of the most exciting British directors working at the moment? Richard Ayoade made his breakthrough in the cult TV series The IT Crowd but since then he has not only directed impressive music videos but also made a well-regarded film debut with Submarine. His second film outing though as a writer-director, The Double is even more ambitious as he transfers Fyodor Dostoevsky’s classic novella to modern day America.

Jonathan Glazer has also made his name by shooting some of the most unique commercials and music videos ever and with just two films (Sexy Beast and Birth) he has created his own characteristic visual style. His latest film, Under the Skin stars Scarlett Johansson in the sexiest role of her career, as an alien creature who uses her sexuality to prey upon hitchhikers is Scotland. With Glazer once again paying more interest in creating a surrealistic atmosphere than following a conventional plot this will probably be not everyone’s cup of tea but it will definitely be an entirely distinctive film.

Somewhere You Should Go… The Book Club Blues

Something you should see…Parade at Southwark Playhouse

What we’ve been up to… Jar Kitchen

Win a pair of tickets to Pop-Up Screens!

What we’ve been up to… Stories, Broadway Market