Something you should see… Richard Hamilton at Tate Modern

If there ever were a barometer to measure the earliest proponents of Pop Art, those included in the exhibition This is Tomorrow would be a good place to start. The exhibition, curated by Bryan Robertson at the Whitechapel in 1956, gave space to numerous architects, graphic designers, musicians and artists that are often credited with kick starting the British Pop Art scene. Richard Hamilton was one of the many artists whose vision of the modern world played a seminal part in the controversial show. His name has won a place in art history and three years after his death, this retrospective at the Tate offers an insight into his life work and collaborations.

Hamilton is most famous for his collages and Just What Is It that Makes Today’s Homes So Different, So Appealing? represents his most well-known work. His use of everyday images served as a humorous and quite accurate account of the modern age and where it was going. Credited with insight into popular culture that went beyond his time, Hamilton’s work is still fresh and relevant today, making this retrospective at the Tate essential viewing. Interested in everything from interior design, products, mass media and later art and politics, his work celebrated the nuances of pop whilst exposing its many contradictory and destructive elements. 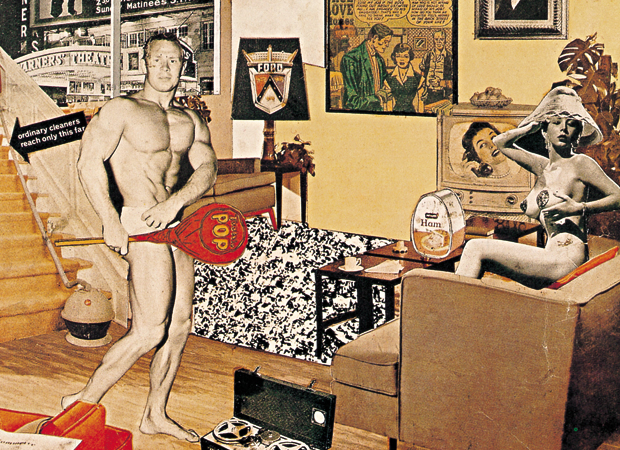 Just What Is It that Makes Today’s Homes So Different, So Appealing? by Richard Hamilton (1956)

Central to the exhibition is the installation Fun House 1956, a room filled with magazine imagery, film posters and art history; a droll slice of modern age, glamour, celebrity culture and knowing nudges.

The exhibition is accompanied by a series of events including reflections on his work by prominent thinkers such as Hal Foster and Mark Godfrey. There will also be a close up of his politically motivated work of the 1980s that focused on the Margaret Thatcher years and the IRA as well as a weeklong specialist collage course. (Words: Laura Thornley)

The exhibition runs from 13 February to 26 May. For more info visit: www.tate.org.uk/whats-on/tate-modern/exhibition/richard-hamilton

Somewhere you should go… The Grant Museum of Zoology

House of St Barnabas are putting on a live art festival

Something you should seee… Robert Lepage’s Playing Cards 1: Spades