Somewhere you should go… Pop –Up Screening at the Paradise: Back to the Future

February is traditionally a very busy month for cinema goers. With the awards season reaching its climax on both sides of the Atlantic, the nominated films usually dominate the list of choices for a night out at the movies. So during such a period the upcoming pop–up screening of the classic 80s sci-fi adventure Back to the Future may seem like the last of your priorities – but there are a couple of reasons why we believe it deserves your attention.

To begin with, Back to the Future could  make a great double-bill with Oscar-nominated Flight, since both are directed by the award-winning director Robert Zemeckis. Furthermore, Flight marks the return of the visionary director to live-action films after eight years of experimentation with 3D motion capture techniques in films such as The Polar Express and Beowulf. So what a better way to celebrate this occasion than by watching his first truly great film? 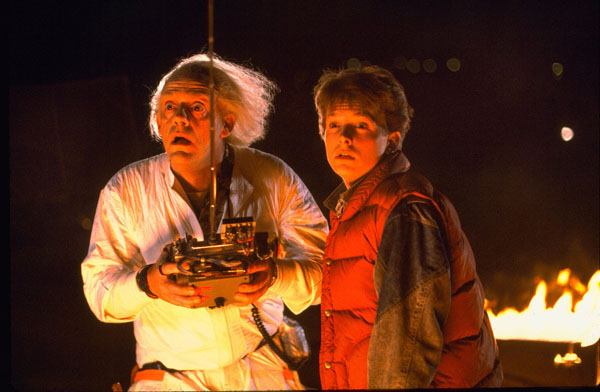 Secondly, this pop-up screening will take place at the restaurant Paradise at Kensal Green where you can watch the film while enjoying some delicious food. Isn’t this a more appealing option than say eating a popcorn box while watching the realistic scenes of torture in Zero Dark Thirty?

But seriously, the fact that  the term ‘classic’ is justifiably applied to Back to the Future should be enough of a reason to go re-watch the film. Taking the premise of time-travelling to thrilling, entertaining as well as intriguing places and offering us two characters that have secured their place in the pop pantheon (Michael J. Fox’s Marty McFly and Christopher Lloyd’s Dr Emmett Brown) it is one of those films that you will always get back to and lingers in your memory much longer than each year’s Oscar favourite. (Words: Apostolos Kostoulas)

The pop-up screening of Back to the Future will take place on Sunday 17 February at 2:30 pm as part of the Paradise by way of the Silver Screen series co- produced by Paradise and Lexi Cinema. For more information go to: www.thelexicinema.co.uk

Something you should do… visit Paris (on the cheap)

Somewhere you should go… Filmbar70 at Roxy Bar & Screen