Something you should see… Argo

It is fair to say that it all went downhill for Ben Affleck’s career from the moment he started losing touch with simplicity. Starring in Michael Bay’s blockbusters and dating JLo -who despite what she proclaimed, was certainly not the same Jenny from the Block anymore- was miles away from his breakthrough role as an ordinary guy in the Academy award winning Good Will Hunting. Over the last few years though, Affleck has successfully managed to reinvent himself as an unflashy director of the gritty little films Gone Baby Gone and The Town. And now comes Argo. 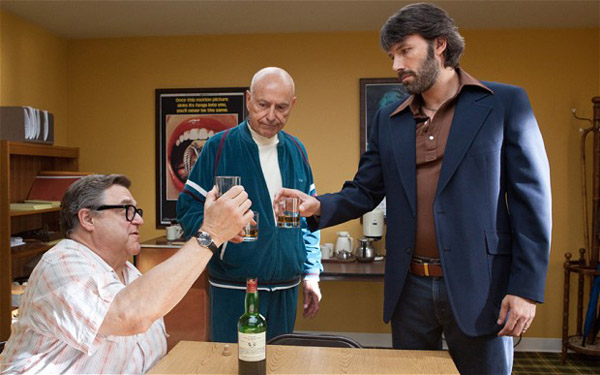 Based on a story so implausible that it could only happen in real life- In the mist of the 1979 Iranian revolution, six Americans find shelter in the house of the Canadian ambassador, having escaped the seize of the American Embassy by revolutionaries who captured 52 Americans. CIA’s plan for extracting those six fugitives was the following: create a bogus Hollywood film that is set to be shot in Iran and smuggle the Americans out as its supposedly Canadian production crew- Argo is Affleck’s more challenging directorial effort to date.

The story offers a great range of intriguing subjects, from the political and cultural clash between the West and the East, to the CIA’s shenanigans and Hollywood’s vanity. In the wrong hands though, this complexity could be an overwhelming burden and the end result may be a total mess. Thankfully, Affleck handles the tone shifts with admirable assurance. The satire of Hollywood is present but it does not distract the viewer from the gravity of the situation and the personal drama of the American fugitives. Similarly, while the film offers a comprehensive political background to the story- and for the most part does not treat the Iranian extremists as caricatures- it never feels like a history lesson.
Argo, instead tries to replicate the atmosphere of the classic American political thrillers of the 70s like All the President Men, building the tension masterfully from the real-life drama. Essentially then, it offers a simple but deeply effective thrill-ride. Just like true Hollywood films do. (Words: Apostolos Kostoulas)
Argo had its premiere in the UK at the 56th BFI London Film Festival. It will be released nationwide on November 7th.

10 of the best alternative film clubs in London

What we’ve been up to… The Waldorf Project

Something you should see… BBKP: D Eye Y at Pump House Gallery