Somewhere you should go… Secret Cinema Presents Back To The Future

It started with an immersive production  of Paranoid Park for just 400 people in 2007, blurring the lines between cinema, theatre and fancy dress parties. Seven years on and Secret Cinema is now commanding international audiences of up to 80,000 for their latest production of Back to the Future, proving it’s become a popular alternative to experiencing films in the capital. Booking a  pricey £53 ticket comes with advice on how to dress up and you’re given a character identity for the night. Attendees are also encouraged to leave their phones at home and keep quiet on the details, which includes a few ambitious highlights you simply couldn’t get in a movie theatre, not even in 3D.

“I feel there’s a global shift towards doing things differently, “ says Secret Cinema creator Fabian Riggall. “We’ve launched in London which is an international city, and I think our audiences are mixed and are into different things. It’s about creating these real experiences that’s mixing different art forms together where people aren’t sure if it’s a concert, a cinema screening, a theatre, a restaurant or a gallery.”

Riggall’s latest project finally opened on 31st July following an unexplained one-week delay and an social media outcry from fans who’d flown in from as far as Cambodia to see the debut. But now that it’s arrived, all might soon be forgiven as the ambitious interpretation has gotten off to a strong start. 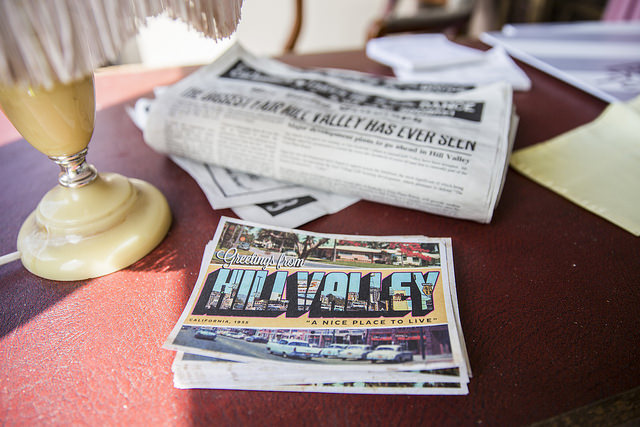 The film’s version of the fictitious Hill Valley, California has been recreated and begins with a walk-through of an actual sheep and chicken farm before the rest of the world is unveiled. The grounds boasts of bungalow houses, retro billboards, a gas station, diners, shops, a town square, a small fun fair, a high school and of course, a replica of the clock tower that featured in the film and double-ups as the film screen. Impressively, no detail has been spared.

Actors playing geeks and jocks in 1950s outfits mingle among the similarly dressed crowds and deliver their dialogue with flawless and upbeat mid-West accents it’s easy to forget you’re in East London. The audience happily gets in on the act too, hitching rides in the vintage cars that whiz around grounds or pose for prom photos. 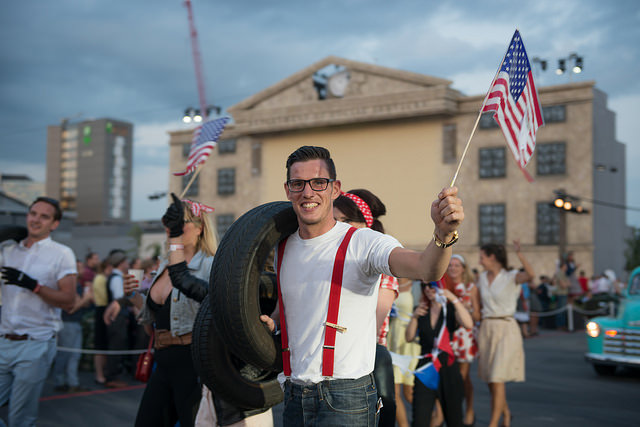 A highlight of the night is when things turn pantomime. A Marty McFly impersonator runs through the crowd and loud cheers go up for the film’s plucky protagonist while booing ensues for a convincing Biff Tannen and his crew who rip around the crowd and are just as intimidating in real life.

The experience starts to lose its lustre after a couple of hours of doing the rounds, especially when the reality of expensive memorabilia and painfully-long queues for food, the rides and toilets begin to kick in. The theatrical forays are a welcome distraction, like the sudden flashback performance to 1985, replete with dancers appearing in lycra and headbands and skipping around the compound. It’s odd, but it surprisingly works. It’s fun when the 80s gang latter take over a school bus and party with audience members to Van Halen’s Jump and Starship’s We Built This City. The night picks up further with a rock and roll performance and that iconic scene when McFly shows off his 80’s style guitar riffs on a purpose built stage before the film screening begins. 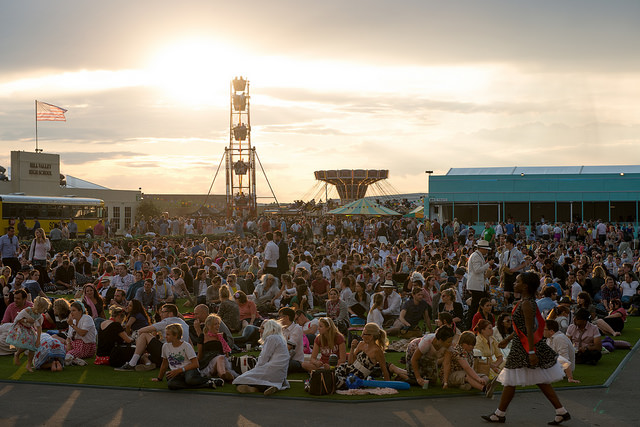 Where previous Secret Cinema productions might have been too obscure or raw to be fully enjoyable, Back to the Future offers plenty of reasons to love the original even more.  Check it out before it wraps up on August 31st. For more information, visit www.secretcinema.org/tickets

Something you should see… Babel

Something You Should Do… make a Mother’s Day Card

Something you should see…Kevin Morosky’s “Six” exhibition, Orange Dot Gallery

Ever wondered where to go to try Nigerian food in London?