Fancy a bit of wordplay? A major retrospective of works by US artist Mel Bochner is being hosted by the Whitechapel Gallery this month. Recognised as one of the founding figures of conceptual art, the exhibition traces nearly 50 years of his work from the 1960s up until 2011. Throughout his career, Bochner has been fascinated with language and its influence on perception. As a young artist, he created a series of portraits of friends based on synonyms taken from Roget’s Thesaurus. This early experimental work provided the foundation for his Thesaurus’ paintings – word chains painted on canvas. Recent work from this series, including Amazing! (2011), will be on show at the Whitechapel. 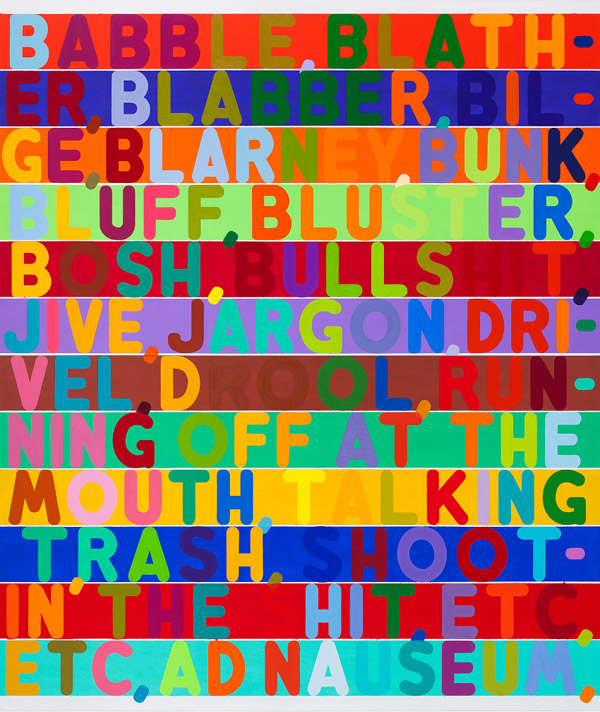 Originally from Pennsylvania, Bochner is one of several artists who came of age in 1960s New York. He was part of an art scene that included Sol LeWitt and Eva Hesse, when conceptual art as a movement was still in its infancy. It was through his investigation into the relationship between thinking and seeing that Bochner pioneered the integration of language into visual art. Though he has explored other systems of communication in his work such as measurements, numbers and spatial relationships, all of which will be featured at the Whitechapel, language still remains a central concern – so this retrospective is definitely worth a gander. (Words: Eri Otite)

Something you should see…Watch Me Move: The Animation Show at the Barbican Art Gallery