Somewhere you should go…. The Boy who Climbed Out of his Face

One of the pioneers of the alternative, immersive theatre production returns this summer with their first outdoor show. Based at the newly opened venue, The Jetty, in Greenwich, Shunt will be taking its guests on a barefoot magical mystery ride into a vast labyrinth of industrial containers.

For six weeks the Jetty will become a hectic, fantasy world with its inspiration taken from literary classics, The Waterbabies and Heart of Darkness. Shunt’s past productions include the Bermondsey street warehouse takeover show titled Money and The London Bridge vaults where they held a six-year residency. If you are new to their productions, expect the unexpected. The performers combine movement, music, acting and set design, brought together to project the themes of the show. There is usually plenty of interacting (so no hiding at the back allowed) and it’s often this element which takes the shows to a whole new level. 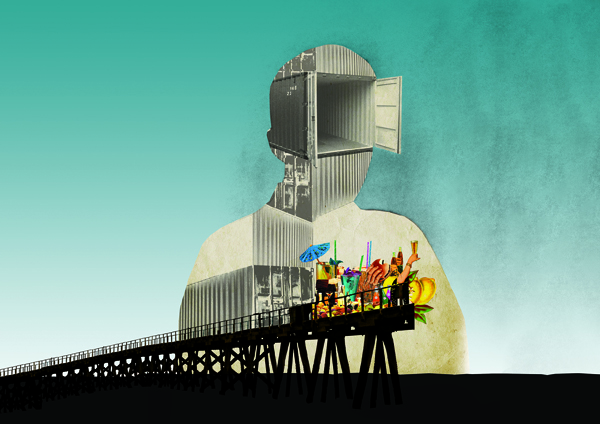 Described as a disorientating event, the show promises that ‘Every 10 minutes 30 people will disappear into a shipping container and are spat out 45 minutes later’: sounds utterly ominous and everything a urban adventurer requires from an immersive theatre performance. The show is barefoot only so I’m guessing a little aquatics paddling might be involved somewhere along the line.

There will also be a pop-up bar serving cocktails and street food to recuperate after the show and muse on what exactly happened! If you know the stories of Heart of Darkness and the Waterbabies you’ll be as intrigued as I am as to where the container pavilion will take you. Whatever the case, not to be missed. (Words: Laura Thornley)

The production runs from 14th August to 28th September.  For more info visitwww.shunt.co.uk

Somewhere You Should Go… Mela