Something you should see… Protest song

The Shed is a new temporary venue associated with the National Theatre, and one that specialises in a more alternative line-up. With a tag line claiming ambition, adventure with a hint of the unexpected, the NT seems to promise a fringe experience in the middle of theatreland. The venue has received great reviews thus far and their December listing, Protest Song, has resonated on the TCé radar.

Based on the Occupy Movement – a protest  that attempts to inspire change in economic inequalities and social wrongs by moving in – the play follows the story of Danny, a man who sleeps rough on the streets of central London. Waking up one morning, Danny finds himself amidst the occupiers on the steps of St Paul’s and is swept up in the peaceful protests that consume the streets he lives on. The campaign hits a nerve with Danny and inspires the anti-hero cord within him. 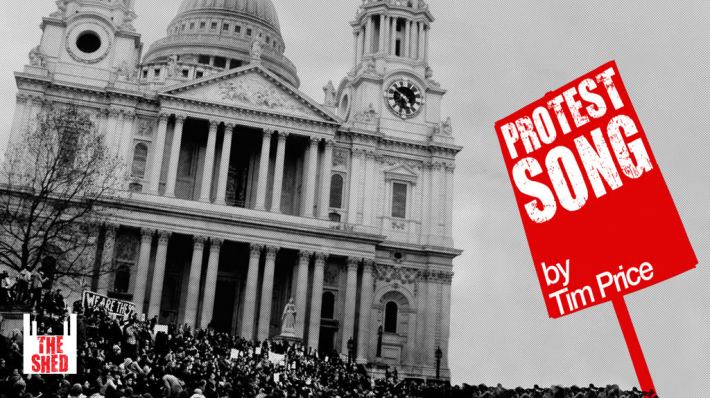 Rhys Ifans stars as Danny in this monologue style play; he’s certainly a name to draw the crowds. The story itself gives a great window into a protest movement that rarely gets a representation in the mainstream and reflects on a powerful moment in recent history. Written by Tim Price, the play promises to be a funny heart-warmer for the festive season, especially since the story is based on a true story.n Seats come at a bargain price of £10-20… the economic inequality of theatre land gets a revision too. (Words: Laura Thornley)

From December 16 to January 11th 2014. For more info visit: www.theshed.nationaltheatre.org.uk

Somewhere you should go… Southbank Centre’s Festival of Neighbourhood