Something you should see… Carl Andre: Mass & Matter at the Turner Contemporary

Before Tracey and her unmade bed, there was Carl and his pile of bricks. The artist behind the notorious 1970s sculpture of ordinary bricks stacked on a gallery floor, otherwise known as Equivalent VIII, is the subject of a new exhibition at Turner Contemporary in Kent. Mass and Matter is Carl Andre’s first major show in Britain for over 10 years and features sculptures made between 1967 and 1983, as well as poems from the same period. 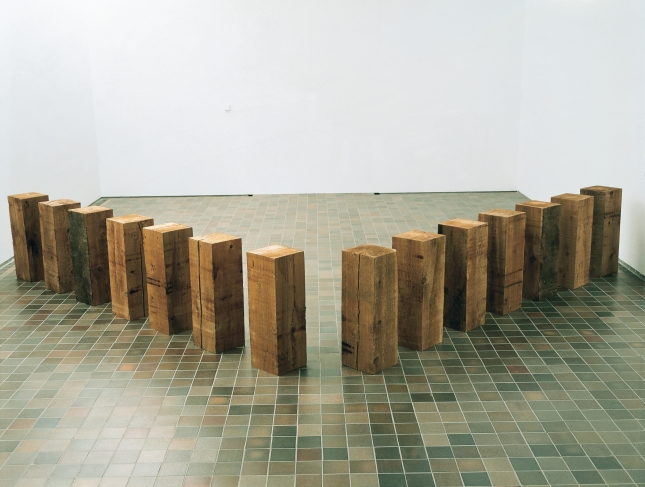 A leading member of the 1960s Minimalist movement, Carl is famous for his sculptures of raw building materials arranged in linear or geometric patterns directly on the floor. Several examples of Andre’s floor sculptures are on show, including Weathering Piece (1970) – a giant chessboard formed from weather-beaten and oxidized metal plates. Many of the floor pieces were also conceived by Andre to be experienced by the spectator, as well as looked at – so, visitors to the Turner can walk across the metal sheets that make up 4 x 25 Altstadt Rectangle (1967). Andre has experimented with brick configurations throughout his career and a number of these works are on view. The piece 60 x 1 Range Work (1983) which has been described, as resembling ‘an enormous Toblerone’, is one of his more recent. Alas, the ‘controversial’ Equivalent VIII is not being exhibited which is a shame, as it would’ve been nice to see what all that fuss was about!

The re-ordered individual words and phrases that characterise the poetry at the show reference Andre’s approach to constructing his sculptural forms. Words in Andre’s poems (just like a wood block or a brick) are used as solitary units to be repeated, stacked or boxed. For the generation of artists who followed, Carl Andre redefined the nature of sculpture – it could consist of ordinary materials, didn’t have to be carved and could be set straight on the floor. Even though, he’s mostly known in Britain for the stir he caused back in the seventies, there is more to Carl Andre and his pile of bricks – and it’s worth leaving the capital to see. (Words: Eri Otite)

Carl Andre: Mass & Matter is on at the Turner Contemporary until May 6th. For more info, visit www.turnercontemporary.org

Something You Should See… Screens at Space Studios

What we’ve been up to… The Past (London Film Festival)