A guide to the 58th BFI London Film Festival: ’71, The Imitation Game and Fury

The BFI London Film Festival should not need any introduction. Now in its 58th year, it has secured a permanent place in our hearts with its eclectic line-up of major motion pictures and exciting cinematic surprises. So without further ado, here’s a  guide to our picks at this year’s festivals, divided into our five categories to help you navigate through this wonderful celebration of cinema:

Trying to find a recurrent theme as you browse through a festival’s programme is a fun little game to play. We discovered this year that a number of films that will be screened take place during a war. A definite highlight amongst those films is ’71 that puts the viewer right into the deadly streets of Belfast in 1971 where a British soldier is accidentally cut adrift  from his unit as the riots break out. Already being championed by critics as one of the best British films of the decade and featuring a magnetic performance by Jack O’ Connell in the leading role, this is a must-watch film. The Battles of Coronel and Falkland Islands is this year’s Archive Gala in commemoration of the centenary of the outbreak of WWI. Restored by the BFI, it is an important film not only for historical reasons (it faithfully reconstructs the two major naval battles of WWI) but also for its artistic value that brings in mind the cinematic brilliance of Eisenstein’s Battleship Potemkin. 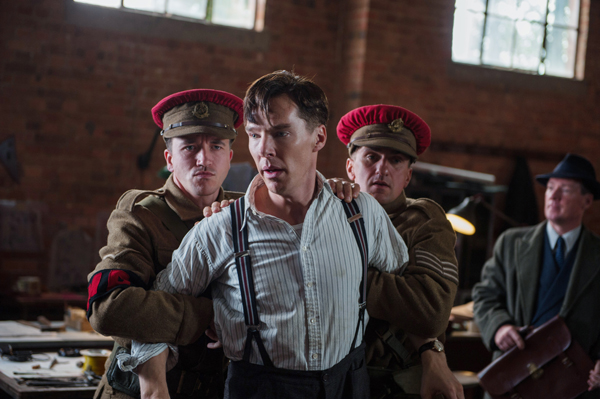 Finally, both the opening and the closing films of the festival are related to WWII. The Imitation Game that opens the curtain of this year’s LFF may not, at first glance, have an engrossing plot (British mathematician and cryptanalyst Alan Turing cracks the German Enigma code) but once you learn that Turing, instead of being treated as a hero, was later convicted for the criminal offence of homosexuality (plus the film stars Benedict Cumberbatch and is directed by Morten Tyldum of Headhunters), you will run to get a ticket for the premiere. Fury is definitely not short of thrills either. Following a tank on a deadly mission behind enemy lines during the last months of WWII the film combines the gritty realism of Saving Private Ryan with the intense sense of claustrophobia that characterised the little-seen but hugely praised Lebanon. Add to this the fact that the leading role of the film is played by one of the biggest film stars in the world Brad Pitt and you have the perfect choice for closing a festival.

Somewhere you should go… Free Speed Listening at Queen of Hoxton