Something you should see… Anjin 1600: Edo Wonderpark

Cartoons, comic books, and video games: not your typical methods for examining history. Artist David Blandy, however, has taken inspiration from these everyday entertainments and integrated them into his multi-room installation, Anjin 1600: Edo Wonderpark. The works explores various themes of interconnectivity and aims to commemorate the 400th anniversary of the first UK trading settlement established in Japan. It is based on the legacy of William Adams, the 17th century Englishman who became the only officially recognised European samurai in Japan. Adams landed in Japan in 1600 after nineteen months at sea and eventually became a key advisor to one of the most important leaders of the Edo era. 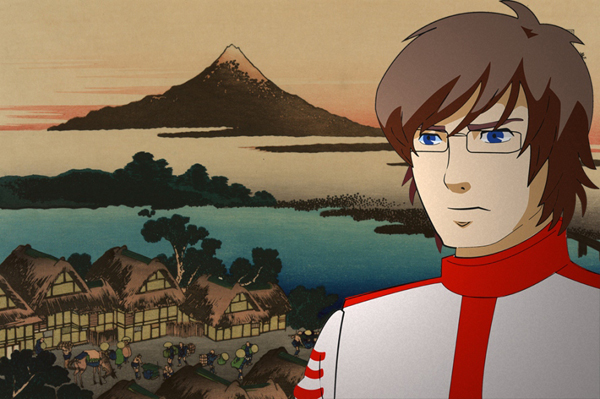 Adams helped to establish diplomatic relations between Japan and Europe and opened the way for lucrative trading partnerships. Eventually he would give up his English name and life to become Miura Anjin, the first western samurai.
To commemorate Adams and his time in Japan,  Blandy has worked with the Tokyo University of Arts to combine contemporary anime techniques with the traditional methods of Edo-era wood block prints to tell the story of Adams in Japan. Blandy, taking a cue from Homer’s The Odyssey, follows Adams’ historic actions while exploring themes of global culture and identity in the modern world.
In addition to the installation, Blandy has worked with the east London community to assemble local stories of immigration. He has integrated these tales and reformed them as sprawling space adventures to demonstrate how powerful an individual’s journey can be. (Words: Barbara Cole)
Anjin 1600: Edo Wonderpark will be on display from 13th September – 26th October 2013, from Wednesday – Saturday 12pm- 6pm, with a late night opening until 9pm on 3rd October. It is located at the Rose Lipman Building, 43 De Beauvoir Road, N1 5SQ. For more info, visit: www.createlondon.org/event/anjin-1600-edo-wonderpark-david

What we’ve been up to… Cucina Asellina

A flash rave and multi-art: my weekend in pictures (January 30th)