Matilda
86 COMMENT
502 Views
I am…a make-up artist living in Dalston, East London. I’m originally a Scouser but I haven’t lived there for almost 10 years. I moved to Leeds for university when I first left before moving here for work. London is currently the only place for me right now both in terms of finding work and my love affair with it. Even after 7 years there is always new places to discover and adventures to be had. I’m still far from tiring of this city.

The area in London I call home is… at risk of sounding cliche/ cringe – East London. This is largely due to the fact that my friends and my brother all live at a stone’s throw so there is always someone’s house to go to for a cuppa/ eat Turkish/ have a tipple with. 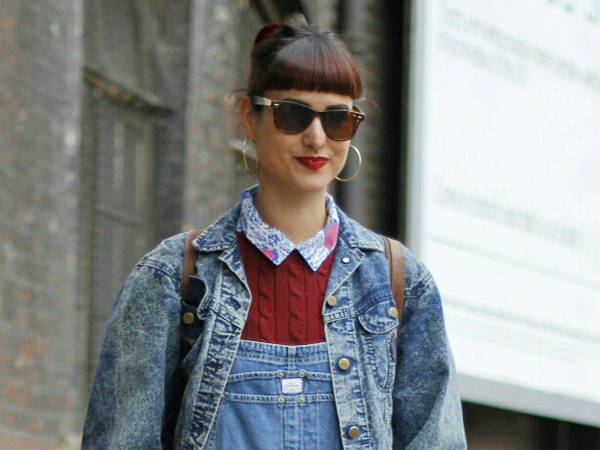 I’ve got to have a meal at…19 Numara Bos Cirrik in Dalston. I’ve tried all the Turks around my neck of the woods and this is by far my fave. The starters are increds – the courgette fritters are little fried cheesy, veggie mouthfuls of goodness and often overlooked. This with the garlic prawns / Halloumi/ Feta Borek/ Falafel are perfect intros to your mains (yes I order all of this at once. I am a fat pie, I know). I highly recommend the Iskender Kebab with the little squares of toast and buttery yoghurt sauce (not very low cal obvs)or a Pide (grilled meat wrapped up in bread and sliced) – or order both, as I do. The clincher with this place is the bread on the side – it’s the lovely thin bread which they whack on the grill so it’s COVERED IN MEAT JUICES. Mmmm. The place is pretty “no frills” aesthetically and BYOB but from my lengthy dish recommendations you can see how much I’m in love with this place… I practically have to waddle home after every visit.
I tend to get my threads (clothes) from…vintage shops, car boot sales, charity shops. I like wearing stuff that you won’t see other people in the identical garms from the highstreet – and it’s often cheaper. However, when I’m feeling flush I might push the boat out and buy something a little higher end from labels like Maje or Vivienne Westwood. My outfits are put together with basics from American Apparel or TTYA (TallerThanYourAverage.com).
To enjoy London’s nightlife, you should…As I live behind what people refer to as “The Strip” in Dalston I often frequent the bars/ pubs in my area. For ease of being able to roll home after I’ve had one too many, often clutching a Lahmachun or kebab from a nearby late night Turkish restaurant. I do enjoy going to Ruby’s, a slightly hidden cocktail bar which sells amazing drinks in a basement which looks like it’s dec’d out with your nan’s furniture. When the climes are hot there’s also a lot to be said for a Kopparberg cider and picnic in a nearby park with your mates until after it gets dark…
If I was mayor, I would…Make proper cycle lanes which separates traffic and bikes with a little curb-like division which stops lorry’s blindly squashing cyclists unawares. This would also protect the public who ride Boris bikes with no understanding of the highway code… They do it in Holland and Barcelona and it seems to work a treat.
My favourite spot to check out art is…aside from the obvious mega galleries (Tate, V&A etc) I really like visiting The Photographers’ Gallery situated on Ramillies St in Soho. It’s quite an intimate place that often exhibits really engaging documentary photography. And it has a nice little cafe, always a crucial factor…
I’d kindly tell a tourist to…stray from the well trodden path of visiting all the standard London tourist spots (i.e Buckingham Palace, Tower of London etc.) They’re overcrowded and overpriced. I would recommend looking up if there were any pop up restaurants/ farmers markets/ food festivals happening. I’d also suggest getting tickets for something like Secret Cinema, something that it’s out of the ordinary and a unique experience. Also walking along the Thames at night and seeing Embankment all lit up with fairy lights in the trees is really beautiful, whatever time of year.
The things I miss when I leave London are…it’s pace. As much as I moan about having my face being shoved into someone’s sweaty pits in rush hour on the tube I do love the hustle and bustle of the city. I love its diversity of people and its vibrancy – I love hearing every language and experiencing so many different cultures in one place. Everywhere else I visit pales in comparison.
My soundtrack to London would include… Lord Kitchener “London Is The Place For Me”. His lyrics sum up exactly my own sentiments for the city and automatically puts me in a good mood. I was introduced to Kitchener by my Dad who was a big fan of Calypso music (amongst other great artists he introduced me and my siblings to) his favourite lyric of his was from his song “Neighbour” – “raise up your hoof and walk out mi’ yard.” For some great double entendre’s check out his song “Dr Kitch”, you’ll know what I mean when you have a listen.

What we’ve been up to… Rocket, Holborn

What we’ve been up to… Pop-Up Screens

Something you should see… Jeremy Deller: Joy In People at the Hayward Gallery