With the summer days almost over and the melancholic autumn breeze slowly creeping in, you might find yourself more inclined to just chill and watch a decent flick two.  Well, the good folks at Sugarhouse Studios have been kind enough to offer an eccentrically joyful mix of sounds, images (and puppets!)  to help you do just that. 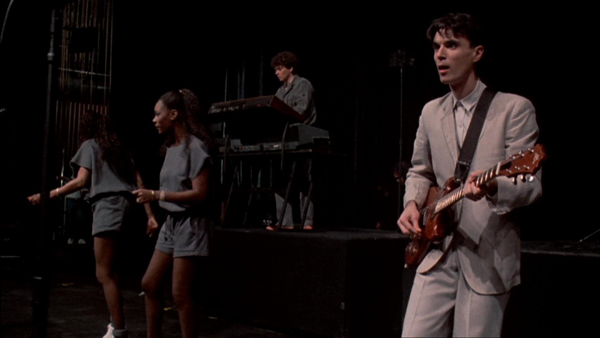 Widely regarded as one of the best rock movies ever made, Stop Making Sense (directed by Jonathan Demme, who went on to win an Oscar for The Silence of the Lambs) follows the innovative American New Wave band Talking Heads for three nights at Hollywood’s Pantages Theater in December 1983 as part of their tour to promote their album Speaking in Tongues. Captured in a straightforward manner,  the film is a visual and aural feast from beginning till the end.

Those of you unaware of the genius that is David Byrne and his band mates, brace yourself because you’re in for a treat. As for the loyal fans,  this interactive film experience will give them  a chance to try and come with even more eccentric clothes than the ones wore by the group and imitate the otherworldly dance moves of Mr Byrne. Part of the Scala Beyond film season.  (Words: Apostolos Kostoulas)
Sugarhouse Studios and Assemble present STOP MAKING SENSE takes place on Saturday 25 August at Sugarhouse Studios. For more information visit www.sugarhousestudios.co.uk/stop-making-sense

Something you should see…Mike Schreiber: True Hip-Hop

Something you should see… Salute