Something you should see… Celeste & Jesse Forever

Rashida Jones may well be familiar to anyone who’s spent the past four years watching her on the brilliant American sitcom Parks & Recreation (now picked up by BBC 4), but for anyone else, she’ll be something of a new face on our cinema screens this month. With only small supporting roles on film so far –  such as in the rather unappreciated I Love You, Man where she played Paul Rudd’s fiancée – Jones it seems has been waiting a long time for a role such as Celeste to turn up. So long, in fact that she felt compelled to write the script and role herself. 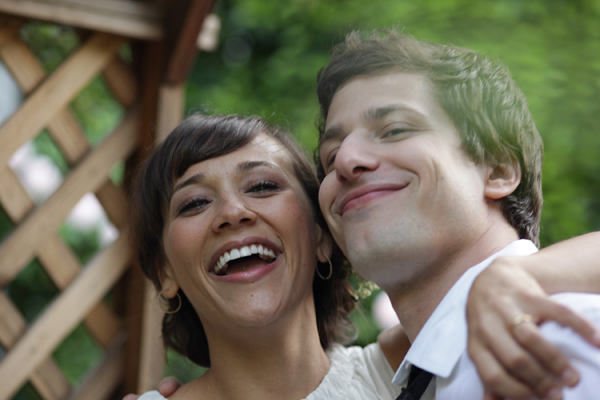 Co-written with Will McCormack, who also stars as the resident dead-beat dealer in the fim,  Celeste & Jesse Forever’s cast list reads as a roll-call of some of the US’s most unappreciated comic actors. But it’s more than just a few laughs strung together with a loose romantic plot. There’s real heart and pain in this film about a couple attempting to navigate their divorce while still remaining best friends. Behaving as though they are still a couple, Celeste and Jesse are informed by their friends that what they are doing is ‘weird and wrong’, sending both them and their relationship into a tailspin.
Andy Samberg as Jesse is as funny as ever, and brings a much needed vulnerability to his slacker character, whereas Jones’ type-A Celeste finds support and friendship in the unlikely form of a self-entitled, teenaged pop star. Dealing with dating demons, betrothed friends and unexpected pregnancies may not seem like a groundbreaking formula for comedy but watching Celeste & Jesse Forever feels like a breath of fresh air, proving that it’s possible to have complicated and complex characters at the heart of a hysterically funny film. (Words: Annie Taylor)

Somewhere you should go… a hula-hooping masterclass

Somewhere you should go… Hip Hop Karaoke, The Social