In its latest run at Royal Albert Hall, Cirque du Soleil’s Quidam has a narrative that is loosely formed around a lonely girl and the grey life she shares with her unhappy parents. This is quickly ripped apart by the arrival of Quidam, who guides the girl into an alternate world where clowns are guides and horned women are playmates.
Supported by live musicians, Quidam often seems stuck between genres—sometimes it is a circus, sometimes a crazy dance party, other times a weird and outlandish fashion show. While the premise can explain the nonsensical explosion of colour and sound, sometimes the chaos can be overwhelming. Performers lurk in the background, merely making strange expressions or twirling, seemingly unrelated to the main event. 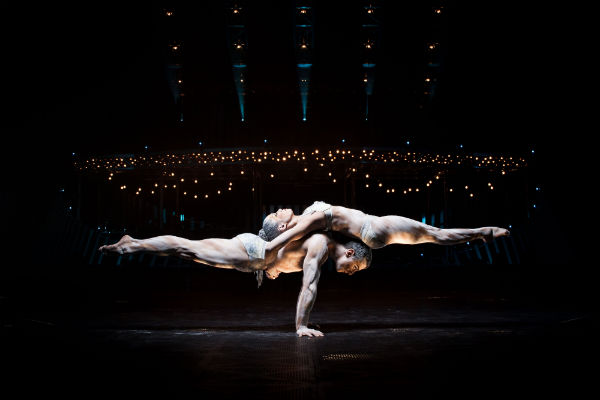 If you can focus on the main performers, though, you will witness some of the human body’s most elegant and powerful movements. A mesmerising routine with a woman bound in a waterfall of red silk literally put the audience on the edge of their seats. Three women lithely twisted their bodies around, rotating and spinning rings in time to the music, while later a larger troupe performed acrobatic feats of tumbling and leaping that made us collectively gasp.
Perhaps the most moving moment of Quidam, though, was its simplest. In a long dance of form and expression, a man and a woman used only their bodies to continually bind and separate themselves . At times, you could be forgiven for thinking the two forms had fused into one. For a few lovely minutes, no elaborate costumes or blaring soundtrack competed for attention. It was simply a graceful expression owed to the remarkable power and ability of the two performers that kept everyone mesmerised…as long as you ignored the man twirling in the pink tutu just stage left. (Words: Barbara Cole)

Quidam is on until 16 February. For more info, visit: www.cirquedusoleil.com/en/shows/quidam/default

Somewhere you should go… I Have a Dream: Architects of Our Republic at Southbank Centre

Something you should see… History is Now

Invisible Treasure at Ovalhouse puts you (and others) centre stage