Something you should see…. Reflections from Damaged Life: an exhibition on psychedelia

Drugs have been synonymous with artists for as long as history remembers. Whether their motivation to indulge in narcotics was for other worldly ideas, a kick from the mainstream or the over-egged sentimentality of escapism for a soul too sensitive for this world, the experience of altered states has been something artists have often referred to. The 60s are seen as the pinnacle of this moment and although many resisted the name, artists of this period became associated with the term ‘psychedelia’. 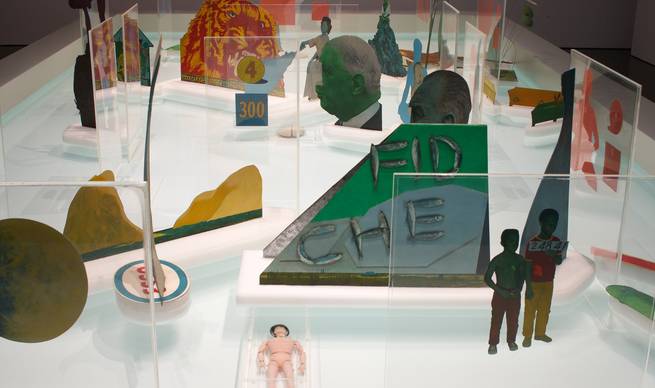 Raven Row’s new exhibition revisits psychedelic art through artists from circa 1960 until the present day. The question posed echoes the dilemma of the chicken and the egg: did drug-taking influence the outcome of the art work, or is it the practise of the artwork – with all its freedoms and experimentation – that influences our perception of drug taking as an ‘altering’ experience? Rather than presenting an argument either side, Lars Bang Larsen has curated an exhibition that deals with the events and effects of psychedelic art: an art that informed performativity and provocation.

Artists on show range from the 1960s performance group The Cochettes, David Medalla and The Exploding Galaxy as well as the wonderful map work of Oyvind Falstroom. More recent artists include Pierre Huyghe and The Otolith Group. As usual for Raven Row, the exhibition is from a non-western viewpoint and the work on show will represent the simultaneous and corresponding moments from different histories around the world.
The exhibition will pose psychedelia away from its sidelined drug-induced coma and reposition it amongst obscenity, playfulness and perhaps a little surrealism. And they promise to leave the far out 1960s, hair and flares clichés out in the cold. (Words: Laura Thornley)

Something you should see… Rwanda in Photographs: Death Then, Life Now

Something you should see…The Spaghetti Western Orchestra

Somewhere you should go… The Book Club’s Birthweek celebrations

Something you should see… Remote Control at the ICA