Somewhere you should go… Fuerzabruta at The Roundhouse

If you were in London six years ago, you may remember Fuerzabruta’s last visit to the Roundhouse. It’s still fresh in the mind of those who saw it and that’s why there is such a buzz surrounding the return of this theatrical show.

Described as a 360-theatre experience, the performance takes place at every angle possible around the audience’s head. Men run full pelt through obstacles, performers act out choreographed sequences in water pools suspended from the ceiling, and acrobats spin and fall amongst suspended fabric. all against a thumping bass soundtrack. No surprises that the name of the show literally means ‘brute force’ and tickets are for standing room only. 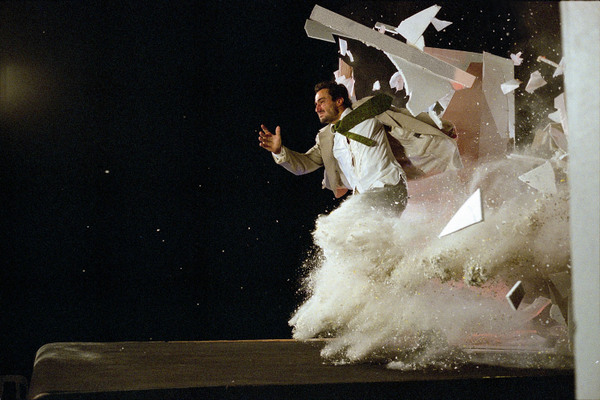 The visual effects are what have earned the show a name and are the trademark of Diqui James, the creative director and driving force of Fuerzabruta. Founded in 2002, James had already co-founded De La Guarda, which operated from 1993 to 2006, with many of the members following him to Fuerzabruta. Prime importance to the band of performers is to be experimental. And, considering many who saw them first time round haven’t been able to witness anything like it since, it’s safe to say they are still the ones pushing the boundaries of high adrenalin theatre.

The show only lasts 60 minutes, but that’s presumably because your heart couldn’t take much more. Having been described as theatre for clubgoers, this theatre experience straggles a pumping techno night and an action film sequence which sounds like a pretty good combination to us. The show runs until late January,  a perfect lift for the New Year. (Words: Laura Thornley)

Something you should see… Project Colony