Something you should do… explore London’s abandoned stations

Love or hate it, it’s hard to deny the impact that the tube and train network has on Londoners. And with a history that spans over 160 years, it’s no surprise that the city has its share of stations that have closed over the decades. The stories behind these derelict and disused buildings is something that fascinates me, especially as many tube and train lines still run through their decaying platforms. It’s what inspired me to write Do Not Alight Here, which takes the reader on 12 walks across London to explore old stations, tunnels and more, giving you the chance to go urban exploring and experience a part of London history often ignored by guidebooks. So here are some tips for seeing these intriguing places for yourself:

Although passed unaware by thousands every day, many abandoned tube and train stations are actually easy to spot. Seen a building with the same red bricks that many Underground stations have? It’s probably a former station. Bricked-up windows or doorways near current stations will also often be an old part no longer used.

Do it right now

London is forever changing. The downside is that its old stations are disappearing fast, so now’s the time to see them. Currently on the danger list are various structures behind Kings Cross, soon to be cleared as part of the re-development. Crossrail means that many old stations in the Docklands will also soon disappear, including Silvertown and North Woolwich.

A bit of a no-brainer, but visiting old station sites in the day isn’t just a good idea because they are easier to see. Go at night and you’ll look suspicious to the beady-eyed folks that man the CCTV cameras that several sites are protected by. 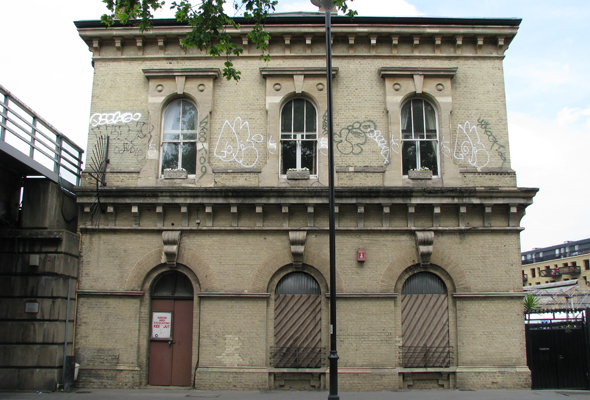 Don’t try to get inside

The true urban explorer is one who dares to venture inside a hidden building they find. But with abandoned stations it’s not advised, so don’t even try. Most still have active train lines running through them, while many old tube stations have empty lift shafts hundreds of feet deep. This makes them very dangerous. They are also monitored by cameras, with some even part-owned by the Ministry of Defence.

Take the Metropolitan line from Finchley Road to Liverpool Street

Many disused stations can easily be seen by riding along the current lines, and this route is one of the best. From Finchley Road to Baker Street you’ll see the old platforms of Swiss Cottage, Marlborough Road and Lords. Later on you can find more old platforms at Kings Cross, Barbican and Moorgate, before the journey ends with an old signal box and bay platform at Liverpool Street.

Peer into the darkness of the tunnels through the window when riding the tube. Simply wrap your hands around your face to block the light from the carriage and you’ll be rewarded with a glimpse of a secret London. Not convinced? Here’s an example: look out the right hand windows on a Central line train between Tottenham Court Road and Holborn, and you’ll see the remains of the platforms of British Museum station, closed 1933. (Words: Ben Pedroche)

Somewhere you should go… The Mayor of Scaredy Cat Town