Anchorman is one of those films that – despite its oft crude humour – almost everyone seems to love. Unlike some of Will Ferrell’s movies, it gets the balance between gross out and silly right and Ron Burgundy – with his bad 70s hair, overt sexism and seductive flute playing – is surely one the best comedic characters in recent cinema history.

To celebrate the recent announcement of its long awaited sequel, Anchorman 2: The Legend Continues, Bloomsbury Bowling Lanes are holding an Anchorman themed party on Friday, June 29th. Everything will be centred around the characters on the night, with a chance to watch the cult classic as well as dine on some juicy ribs, drink some “scotchy scotch scotch” and participate in a ‘chat up line competition’ (should be interesting!)

There will also be DJs providing live soul, jazz and funk and plenty of other amusing film themed shenanigans.

So don’t wait around; get yourself “a ticket to the gun show”. There is at least “a 72 per cent chance” you’ll have an awful lot of flare-wearing mustachioed fun. Later you will most likely tell us, “You’re so wise. You’re like a miniature Buddha, covered in hair. (Words: Aoife Moriarty) 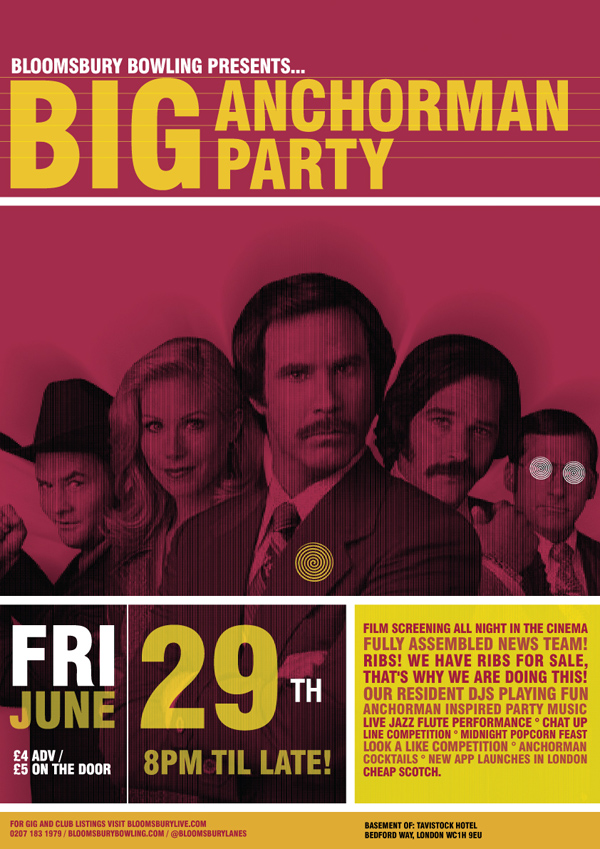 Aoife Moriarty is a freelance arts writer and film graduate. Her own blog can be found here: http://modoeslondon.wordpress.com.

Something you should see… Run to Run

Something you should do…learn photography in London

Somewhere you should go… Afrovibes Festival