Anyone hooked by television thrillers Forbrydelsen and The Bridge will know already what an eerie and unsettling backdrop rural Scandinavia can provide. Extract the scenery from the drama, isolate the overriding sense of uneasy trepidation it initiates and distil this into concentrated form, and you have the films of John Skoog. Fitzrovia gallery Pilar Corrias are noew exhibiting two brand new films by the young Swedish artist: Sent på Jorden and Förår. They are arresting and beautiful works that herald the beginning of a promising career for the artist who has not yet hit his thirties. 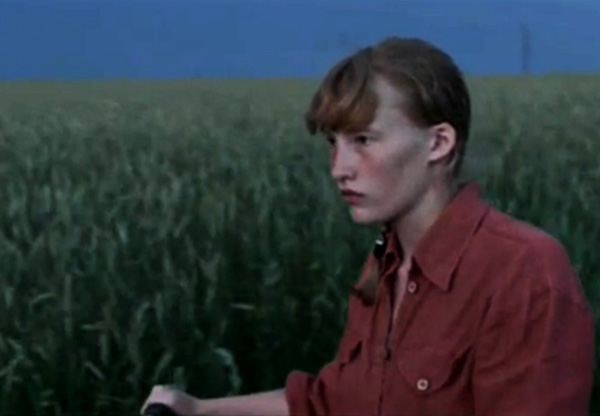 Sent på Jorden (Late on Earth) has been described as Skoog’s first ‘documentary’ film, but it defies this categorisation in its conventional sense. Rather than presenting us with a particular story, narrative or event, the artist documents an atmosphere. The place: the small agricultural town Kvidinge, Sweden, where the artist spent his childhood years. The hour: that specific time of day when the sun sets and a part of the world is bathed in the otherworldly light of dusk.

Sent på Jorden  was shot over ten days, a few weeks after midsummer. Skoog and his producers used these days to plan meticulously what they hoped to capture in the half-hour-long window of the perfect light conditions each evening. The results are extraordinary. In a series of thirteen scenes we watch various figures prepare for nightfall as the day winds down: a high-cheekboned girl with black eyes makes her way home through tall grasses; strawberry pickers with expert hands work against the approaching darkness to gather the final fruit of the evening; a group of children play a last silent game of football before the inevitable call to come inside. Förår (Driver) delves deeper into the psyche of one of these characters. It is a portrait of boredom, solitude and the subconscious, with an inconclusive ending that will leave you decidedly uneasy.

Short-film buffs can marvel at the films’ perfect pacing and Skoog’s careful treatment of light; aesthetes will be blown away by the violet-yellow palette of the landscapes; thrill-seekers will be held captive by the inexplicit sense of threat running throughout. Stop, sit and watch Skoog’s two films at Pilar Corrias and be transported to Kvidinge. They offer an aesthetic feast, but you may feel more than a little weird afterwards. (Words: Florence Ritter)

Something you should see… Julie Mehretu: Liminal Squared at the White Cube

What we’ve been up to… All Star Lanes, Victoria House