Laure Prouvost’s solo exhibition at the Contemporary Art Society couldn’t have come at a better time. Only this week, the French artist was awarded the  Turner Prize, amidst an impressive line-up of David Shrigley and hot favourite Tino Sehgal  – and earlier in the year, she had won the Max Mara art prize for women. If there has ever been a more apt time to evoke the spirit of Martine McCutcheon’s Perfect Moment, I’m struggling to think of one.

Prouvost’s touching reaction at her Turner Prize win echoes the charm and innocence often found in her art work. And, undoubtedly this is what has brought her to fame. Her work moves between installation, video and performance, engaging with the viewer and experimenting with the relationship of artist and audience. 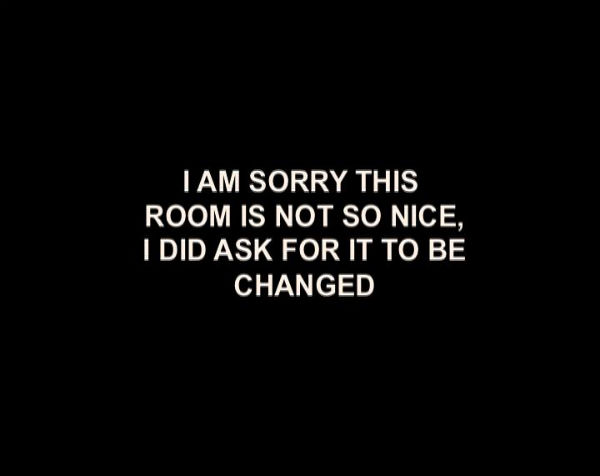 As a French artist living in London, there is also a notable concern with language and translation in her work, a pre-occupation with the unwieldy nature of language, text, and the language of her medium of choice, film. Prouvost charms her way through the frustrations engaging a mix of make-believe, honesty and wit, often spelling out the limitations of art to the viewer. Mocking the engine of the art world and its own recently named ‘art-speak’, the artist bonds with the audience, dispelling the pre-supposed hierarchy that often consumes the gallery space.

The exhibition centres around the video Monolog, an artwork that won Prouvost the Principal Prize at the 56th International Short Film Festival Oberhausen in 2010. The film was bought by the Contemporary Art Society for the Whitworth Gallery in Manchester, but makes a guest appearance down south for this exhibition. Prouvost may well be the artist of the moment – so don’t miss it.   (Words: Laura Thornley)

On until January 17th 2014.  For more info visit: www.contemporaryartsociety.org/event/displays-laure-prouvost

Something you should see… Protest song

Something you should see… Paolo Roversi at The Wapping Project