Coinciding nicely with the biggest and brashest art event in London, the Frieze Art Fair, is Kehinde Wiley’s first solo exhibition in the UK: an opportunity to see some interesting and contemporary art without the entrance fee (and circus). The exhibition is part of Wiley’s broader painting project ‘The World Stage’ featuring men (and this time women too) from different countries around the world, painted in a traditional portrait style. And this particular instalment at the Stephen Friedman Gallery focuses on his work in Jamaica. Wiley’s paintings have attracted much attention thanks to their evocative subject matter. Drawing on traditional painting styles, Wiley creates portraits of black men positioned in austere and historic poses, directly referencing paintings of the past. The artist’s new portraits still bear the names of their historic predecessor but this time feature a modern black male: a figure rarely seen in Western portraiture. The artist intends to make the presence of the black male radical, beyond that of the too often-prevailing negative stereotypes. Aligning them with historic moments of power, Wiley unites the 18th and 19th century up to present day. 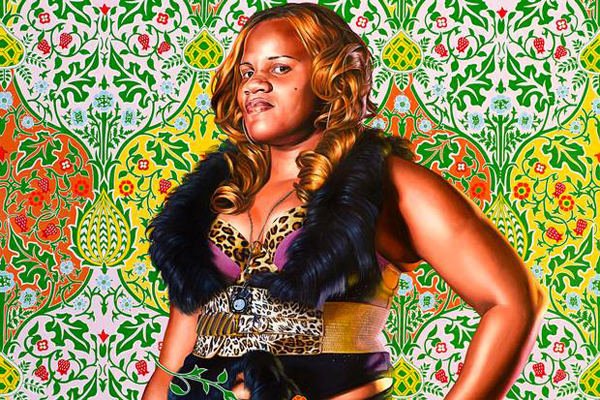 In the Jamaica series on show in London, Wiley focuses on the past relationship of Britain and Jamaica. Wiley infuses the culture of Jamaican style and dancehall against a backdrop of William Morris design, which comes to life and merges with the tattoos and patterns of the subject matter; a comment on the common past. Despite his usual preoccupation with masculinity, Wiley has chosen to include women in this series. In a similar style, they adopt poses from British paintings, juxtaposing the historical reference of sitter and artwork against the island and the British colonial power. Wiley’s paintings are large, bold and an interesting blend of pop culture with the past. (Words: Laura Thornley) Kehinde Wiley’s The World Stage: Jamaica is on from October 15th to November 16th. For more info visit: www.stephenfriedman.com/exhibitions/forthcoming/kehinde-wiley-the-world-stage-jamaica/

Something you should see… Seduced By Art at the National Gallery