Something you should see… Casablanca: The Gin Joint Cut

How do you stage one of the greatest films of all time? Spoof it, of course. That seems to work for Gilded Balloon, in their comedic production of Casablanca. A three-strong cast take up the iconic roles of Rick Blaine, Ilsa Lund and Victor Laszlo, in a faithful retelling of the classic love triangle, played out against the backdrop of Morocco during the Second World War. Casablanca is a seedy little bed of corruption and Rick’s bar the hangout of choice for its lowlife denizens, corrupt officials and emigres desperate to flee this purgatory. When two hard-to-get exit visas come into Rick’s possession at the same time, Ilsa, his ex-lover, walks back into his life with her husband, and he’s forced to make a choice between his old life and the possibility of a new one. 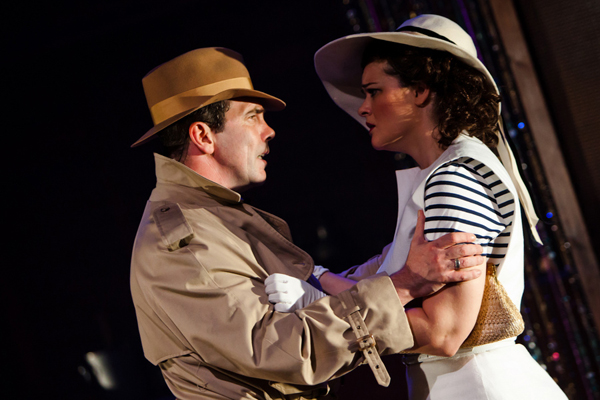 Gavin Mitchell gives an especially good turn as Rick, down to the characteristic drawl and seen-it-all eyes; in fact, there are strong performances from all three actors, but that’s where the respectful homage ends. Director Morag Fullerton has distilled the story into key vignettes that will be familiar to anyone who’s seen the film, but she leavens the love story with such a fun-loving combination of slapstick, audience participation and sporadic tap-dancing that this is one production you don’t dare take seriously, and it is all the better for it. Besides playing the main protagonists, each actor has another three or four characters to inhabit. Clare Waugh evades all danger of ever being pigeon-holed, going from doe-eyed love interest Ilsa to hateful Nazi Major Strasser in the swish of a swift costume change, whilst Jimmy Chisolm’s camp Captain Renault is quite possibly the comedic star of the show. The ‘battle of the anthems’ scene is a highlight (a tip: brush up on your French).

Casablanca: The Gin Joint Cut manages to take a movie classic, inject it with just enough irreverence to make it a thoroughly enjoyable romp, whilst retaining just enough respect to make you want to watch the original all over again.

Somewhere you should go…Notting Hill Carnival

Somewhere you should go…This Is Design @ the Design Museum

Something you should see… Siobhan Davies presents ROTOR