Something you should see… 1984 at the Playhouse theatre

After a stint at the Almeida theatre, this critically acclaimed version of Orwell’s seminal novel moves to the West end’s Playhouse Theatre. Having attracted the kind of attention any Headlong production is worthy of, this very relevant take on 1984 makes this second chance a no-brainer: it’s a must see.

Written in 1949, Orwell’s story was originally catalogued under science fiction, as it explored a dystopian world of tyrannical control of mind and action. Over the years the tale has slipped from the fantastical to the downright prophetic. Many concepts throughout the book have entered our everyday consciousness from Big Brother, newspeak, to room 101 and 2 +2 = 5. The novel even made an adjective out of the author’s surname: if that doesn’t make Orwell one of the most influential thinkers of our time I’m hard pushed for something better! 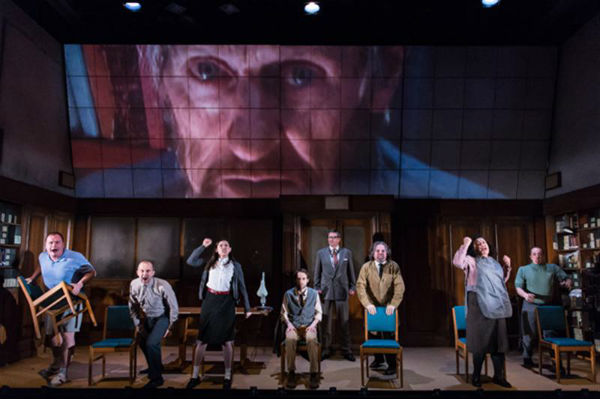 With Headlong’s theatre productions cleaning up at the Olivier Awards this month, they are the theatre-makers on everyone’s lips. Their new adaptation of 1984 has been created by Robert Icke and Duncan Macmillan and co-produced with Nottingham playhouse and the Almeida Theatre.

The Headlong team have incorporated the very issue of how the novel has infiltrated our modern mindset in this new version. They skillfully hold a mirror up to our modern world and expose the vitalness of it to the present days politics – Edward Snowden, Bradley Manning, Wikileaks…. you get the picture? The play explores a world as it collapses under the pressure of big brother’ gaze, skillfully brought to life by the design of Chloe Lamford. Don’t miss it. (Words: Laura Thornley)

1984 – Trailer from LivEveryPlay on Vimeo.

Somewhere you should go… MI1020: A Gingerline culinary spy adventure