Something you should do… go travelling in India

In February, TCé contributor Flora Baker left the Big Smoke in search of fun and adventures  in India.  She’s been documenting her trip on site www.thirtyonedistant.wordpress.com, and below are snippets from our favourite posts so far:

On the morning of my 24th birthday, I awoke to red ants crawling in my toothpaste and a broken toilet seat. I turned over and groaned; after a few days respite, my stomach was making its ridiculous gurgling noises again.

We were in Mandu, a little village located in Madhya Pradesh, and the unexpected location of a tribal wedding fair that succeeded in both terrifying and exciting me in equal parts (there are no photos of said fair because the drunk and stoned locals were much more touchy feely than usual – there was a fair bit of attempted hair and skin grabbing). Luckily, our wonderful leader, Chetan, was there to navigate the crowds, the staring, and to use his patented subversive tactics when various sadhus tried to touch the white girls or offer us weed.

In case you weren’t already aware, I now find myself in India, one week into a seven week kaleidescopic journey around the whole of the country. When I arrived in Mumbai I met my fellow travellers; a motley crew of Ozzies, Americans and a wonderful Swiss gentleman who tells us he hails from ‘Switzy’. The six of us will be together for the entire trip, but after two weeks, when we get to Delhi, we’ll switch group leaders and perhaps welcome some more travellers into the fold – and the same will happen again in Chennai, sometime in April. I’ve been slowly forcing myself to accept that travelling with an organised group is not something to feel uncomfortable about; by having the crucial elements of transport and accomodation – not to mention the all-important route – already sorted, it leaves me with the luxury of absorbing everything around me. Which, as it turns out, is pretty much a full-time occupation on its own….

From the moment I stepped off the plane in Chennai, I knew I was going to like South India. The air was warmer and more comfortable, the streets were cleaner, and people were happier – not to mention the strange absence of beggars wandering around. We’d left the North in somewhat of a rush, with a few people still feeling under the weather, and it was such a relief to find ourselves somewhere completely different.

As ever, it’s an incredible fact of India; the country is made up of so many different people and locations that you feel as if you’re in a different country from state to state. In a place like Chennai, the capital of Tamil Nadu state and the fourth biggest city in the country, I expected to be thrust into yet another bustling metropolis like Mumbai or Delhi, that would only serve to disorientate and overwhelm me. Instead, I saw women wearing jasmine in their hair, and men smiling instead of staring, with a general sense that the people in this area were merely inquisitive at a group of Westerners walking through their midst – no photos being snapped, and no shouting. The pinnacle of this wonderful change in atmosphere was taking a stroll along the local beach, with our third and final guide leading the way. We hadn’t welcomed any more members to our travelling group – merely said goodbye to some who left us in Kolkata – so were happily able to maintain the same dynamic with each other, which was a welcome relief after travelling for five weeks! 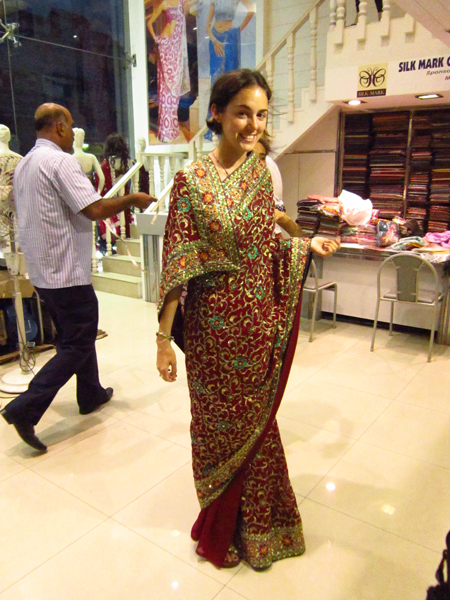 I’ve been thinking a lot about the way I look at India. And, by extension, the way that India looks at me.

For the last two months, I’ve seen fleeting glimpses of a vast amount of India, whether sitting on buses, sleeping on trains, or fearing for my life in leaking boats and terrifying tuktuks. Many of these glimpses have been caught for posterity through a camera lens; many more have been noted down on paper. I’ve wandered through temples and markets, forts and deserts, rivers and beaches – and every day, I’ve passed countless children, teenagers, adults and the elderly, many of whom have fixed their unblinking gaze on me until I’ve disappeared from view. To counteract this feeling of unexpected exposure, I’ve made it a priority to speak to every local that I can, feeling the need to connect with the ‘real’ India at every opportunity.

For the last two months, I have also been swanning around the country with my fellow Western travellers, indulging in the mystical, spiritual, and ultimately tourist-invented impression of India. I’ve bought whole-heartedly into the Ali Baba trousers, the anklets and toe rings on each foot, the cool, hippy, cut-on-a-whim-in-a-Rajasthani-bathroom hair and, above all, the awestruck expression at every single sight. I felt like I was really tapping into what makes this place tick. I felt like I was starting to belong.

And then I arrived on the other side of India, and my Emperor’s clothes were stripped away (both metaphorically; I wasn’t standing anywhere in the nude. Still looked pretty ragamuffin-like, though). My hair wasn’t cool, it was a mess; my anklets and toe rings are actually a signifier of marriage to most people and are thus quite confusing; and, worst of all, I was told that, instead of cool trousers, I have actually been wearing pajamas. And to think I wondered why people kept staring at me!

Something you should do… visit Paris (on the cheap)