Something You Should See… Safwan Dahoul at Ayyam Gallery

‘If it were possible, I’d love to make a painting with no colours, not even black and white’ muses Safwan Dahoul, thinking aloud. We are at the opening of an exhibition of his work at Edge of Arabia, Battersea, which is running concurrently with his show at Ayyam Gallery’s space in New Bond Street. Dahoul dislikes interviews; Ayyam Gallery co-founder Khaled Samawi even joked that the painter was disappointed to be have been given a UK visa to visit his own show. As one of Syria’s most successful artists, Dahoul is curiously humble; a characteristic that can be read into his deeply personal paintings. Along the walls of Ayyam Gallery, bent over figures with bowed heads and interlocking limbs shrink into themselves, their heavily maquillaged eyes blank and deeply introspective. 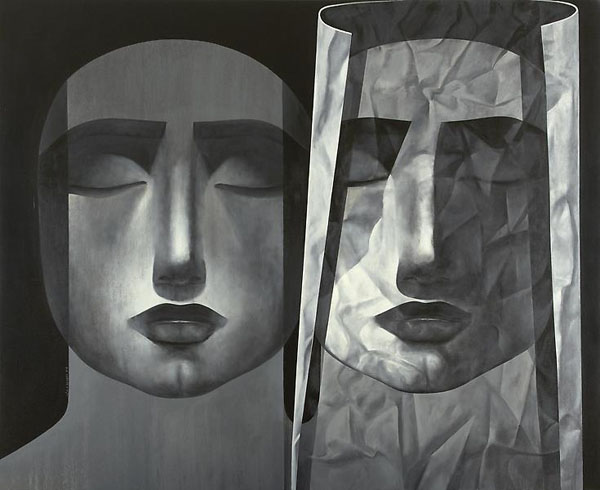 Each of the works on show at both Ayyam Gallery and Edge of Arabia are entitled Dream, and together they form a strange portrait of the artist’s subconscious mind. Working from memories of his own dreams, Dahoul transforms their transitory and uncontrolled narratives into smoothly executed and compositionally well-balanced works of art. Painted in a range of greys, black and white, they have a sobering and stilling effect on the viewer.
Although the works are open to interpretation, it is interesting to read them with reference to Dahoul’s own biographical history. He began numbering his Dream paintings after the passing of his wife, from which time his works became more contemplative and darker, in both spirit and palette. The checkerboard grid patterns, with their stifling repetition and restrictive structure, appeared as a motif after Dahoul was forced to move from his native Syria to live in Dubai. 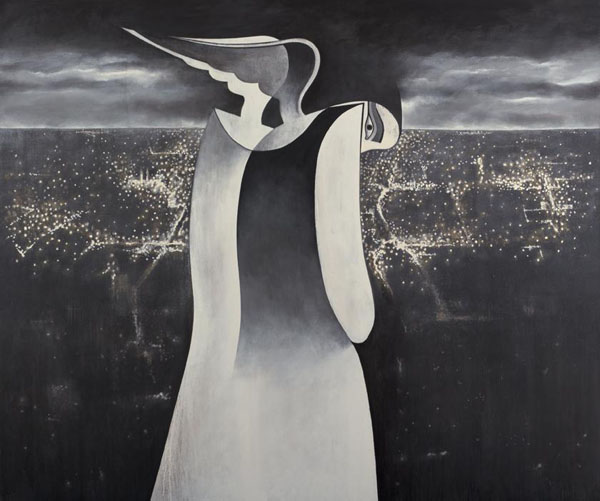 Although Dahoul uses painting as a conduit for self-expression, there is a surprising regularity, order and logical pattern to his work. The paintings contain visual references to Insular metalwork, Egyptian and Roman art, as well as Arabic calligraphy. Although he is a Syrian artist first and foremost, this widespread range of influences confirms that it isn’t possible to reduce Dahoul’s work to its area of origin. Ayyam Gallery, who raise awareness for and promote art from the Middle East, have this month chosen to show the work of an artist who matches their own broadening scope of influence on the international art scene. And one who, in spite of his initial reluctance to come to see us, quietly admitted that he has loved London. (Words: Florence Ritter)

Safwan Dahoul’s Repetitive Dreams is on at the Ayyam Gallery until June 8th. For more info, visit: www.ayyamgallery.com/exhibitions/safwan-dahoul_2/press-release

What we’ve been up to… The Bengal Lancer

Somewhere you should go… Breakin Convention 2013

Something you should see… David Breuer-Weil: Project 4