It’s been nearly 20 years since Wu Tang Clan emerged out of NYC to become one of the most commercially-acclaimed groups in hip-hop history – and they’ve got no plans of slowing down, with talks of a new EP on the way and making their first ever appearance at this year’s Glastonbury. Ahead of their London shows on June 11th and 12th, The Cultural Exposé caught up with Wu Tang’s legendary producer in New York to get his thoughts on touring, expanding the Wu brand and why, despite being grown men in their 40s, they still make promoters a little nervous.

On getting their “act together” to tour

Well, there’s always somebody missing! It’s a big group, we have families now too, so it’s not so easy to schedule things. I think that in our early days, we had more fun and enjoyment being in the studio, being at home and making music. And then, as we started to grow up and mature, and we realised that this music was being accepted by the world, we thought, “let’s go out and tour” and we can perform. Economically, it became logical for some of the members…it became another form of income. But for me, it wasn’t really about that because I still get alot of jobs and work expressing my heart. But going out and touching the people…I love doing that.

First of all, making a piece of history is always great…Glastonbury helps spread love and help through music, and they’ve got a great line-up this year. It shows that our humble beginnings from Staten Island and Brooklyn, as high school dropouts trying to make a better life for themselves has grown to become a worldwide brand and part of music history. 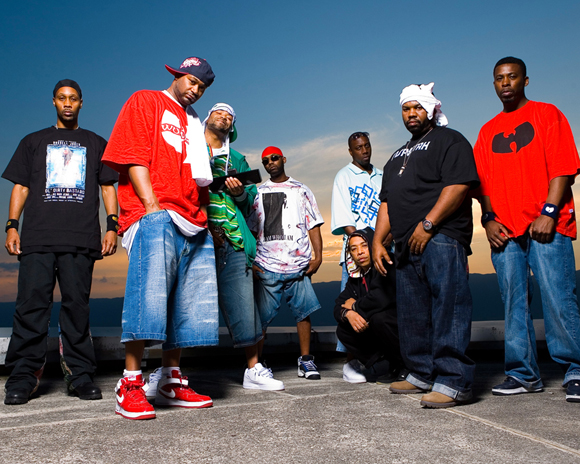 On expanding the Wu Brand

I’m heavily into film and now I’m looking to take the Wu Tang saga, legacy and brand into the film world, in the same way I was able to make some good albums for the world. I would love to make films that are classic and people can watch and enjoy – not only about the Wu Tang Clan, but things that fall into my artistic expression. I got scripts about a blues singer, stories written about Djing, the Wu-Tang life. There’s a script called C.R.E.A.M about how we grew up, then there’s Raekwon’s story about how he lived in Brooklyn and moved to Staten Island. So all these different ideas, I’m now putting that energy towards film energy, na mean? It’s showing that the Wu Tang brand is not only a brand of dope MCs, but also artistic people in general.

On recording a new album

I’m not gonna speak much about it right now because we always talk about it, but The last Wu-Tang album was four years ago! That was a big, disastrous campaign too. So in order for us to do another album, we have to really be dedicated, not only to the music part of it, but also the marketing part of it. An album is like a presidential campaign, you gotta go out there and touch the people. But there is an EP coming out, and we’ve done some music collaborations…I’m not gonna spoil it by talking about it, let’s just do it and enjoy the results of it, and hopefully from this tour, we’ll promote it properly.

On pre-conceptions of Wu Tang Clan

It’s case by case; some people are scared of us still; some people think we’re a bunch of crazy motherfuckas that’s gonna come and fuck up the building. Some people accept us for who we are and the energy we bring to their festivals or to the concerts and the kids love it! What happened about 3 years ago that really made me feel confident about Wu Tang was, we did a show in Seattle and it was 19-year-old kids in the audience, singing every fucking word, and I’m thinking: “how the fuck do they know the songs?”. Based on the Internet and the way the world is now, people know your music from all age brackets. And I was like, “you know what yo? Our music is good, our lyrics are good, our beats are good…we don’t gotta worry about it”. So even with the bad reputation that we had, some people realise that we’re more mature now, and have been more reliable in the last 5 years now – I think – and I know one thing; our music is great, our style is cool, and it still remains true that Wu Tang Clan ain’t nothing to fuck with!