There might have been a mild sense of caution surrounding this year’s festivities off the back of the London riots, but a heavy police presence – 5,500 – ensured Notting Hill Carnival 2011 kicked off in the highest of spirits.

By 10am, crowds were packing out Tube stations like Notting Hill Gate to make their way to Children’s Day, which is known for being the more family-friendly alternative to the main event on Bank Holiday Monday. 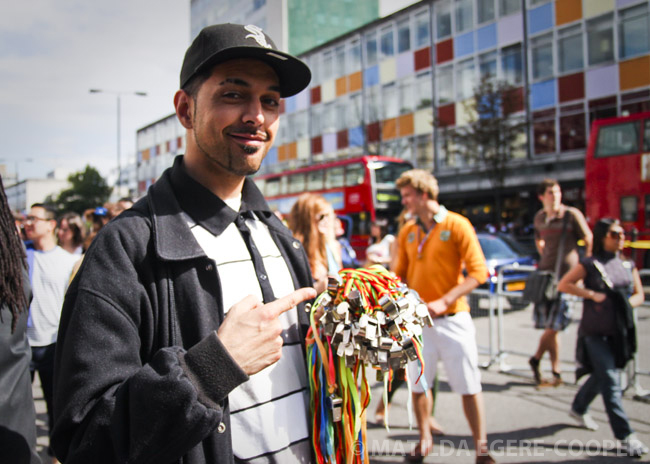 Still, the Sunday was fantastic.  Paint and powdered-covered festivalgoers  – who’d took part  in the honoured “J’ouvert” tradition in the morning  – sauntered around the various roads, threatening to smear up anyone in sight, while adults and kids had their pick of some of the best spots to simply hang about for most of the day.  TCé’s highlights were Mau Mau Bar at 265 Portabello Road, which was constantly surrounded by a lively crowd of revellers getting down to dancehall, while further up outside 318, you had the chance to pair up with a willing partner  to dance salsa at the Latin Rave Street Jam soundsystem.

It was also great to see Oxford Street’s busking star Jo Bucket and friend putting on an outstanding drumming performance – purely with paint buckets – under the Westway, despite competition from another drumming collective merely metres away. 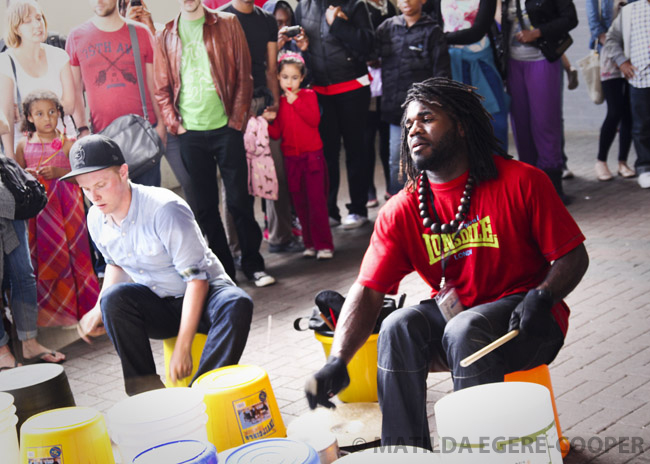 As previously announced, the infamous Rampage soundsystem was notably absent for the first time in 17 years, along with Norman Jay’s Good Times street party, which was a shame – but thankfully, the legendary King Tubby didn’t disappoint as his infectious set of reggae, dancehall and bashment on Clydesdale Road continued to represent, two decades on.

Food was plentiful and varied as usual – but  prices for a jerk chicken meal were steepish at £7 (and anything cheaper came off dodgy to say the least). However’s Levi Root’s “Rasta-raunt” on Westbourne Park Road  looked reputable – further sealed by the fact the good man himself was even around, taking pictures with fans.  (Advice: there’s a series of food stalls along Westbourne Park Road which seem better than the closer Portabello Road options in terms of price and quality of food – it’s worth the walk!) 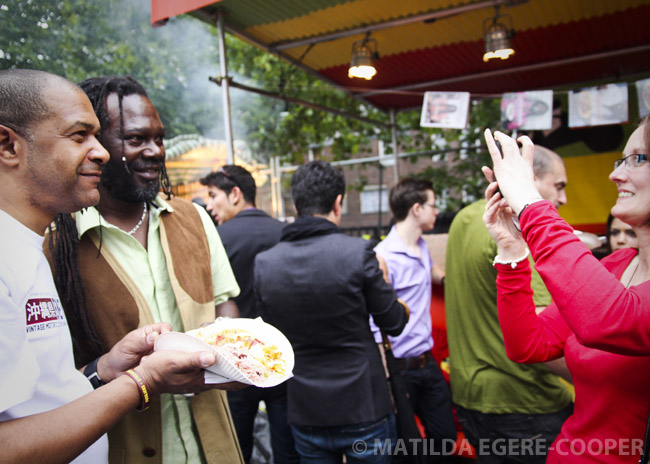 The weather was temperamental with regular rainfall forcing festivalgoers to temporarily seek cover, and the procession finished earlier than usual. But Monday’s event is expected to be dry and warm – and of course, 10 times livelier!

If you’re attending carnival today, share your thoughts, pictures or videos  @culturalexpose  on Twitter or info@theculturalexpose.co.uk. Look out for our carnival tips which we’ll be tweeting throughout the day.

Somewhere you should go… Freshly Scratched: A Christmas Show