To be honest, The Origins of the Afrocomb is the sort of exhibition I would’ve expected to see at London’s V&A, given the museum’s reputation for putting on outstanding shows that celebrate the many facets of  African history and the Diaspora (2011’s ambitious Afropolitans showcase springs to mind). But, it does sits well in an institution as breathtaking as The Fitzwilliam, renown for its collection of antiquities and art that are so close to touch, you’re asked to check in your bag on arrival to prevent you knocking anything over. That said, the afrocombs on show are encased and out of reach, but are still remarkable to look at, especially as they span over 6,000 years and present a compact history of hairstyling within black culture. You get to see the contrast between crude and contemporary versions of the styling implement, scroll through interactive galleries, and later, get a reminder of the tools that became more popular in the 20th and 21st century, like hotcombs and electric curlers. 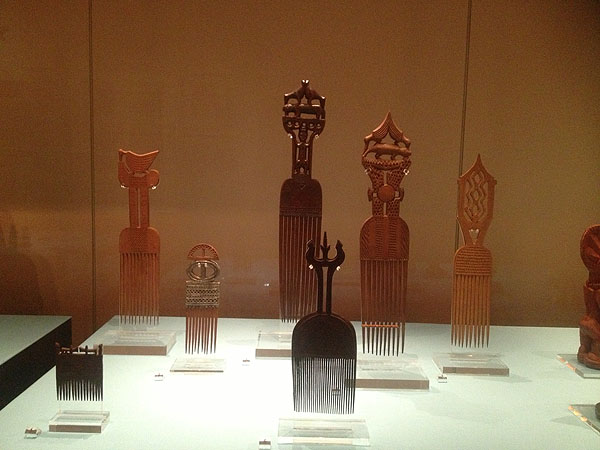 With plenty to read, watch and see, it all makes for a quality insight into a subculture that hasn’t been presented in such an accessible way since Chris Rock’s Good Hair documentary in 2009. Just a shame the exhibition isn’t bigger – but the programme extends to The Museum of Archaeology & Anthropology (MAA) where you can find three further art installations that impressively recreate the “home salon”, the barbershop and the hairdressers” Those installations wrap up on September 28th but you’ve got until November to check out the free Fitzwilliam exhibition and accompanying programmes. Go on the weekend for just £22 for an off-peak return ticket from Kings Cross – you’ll be there in just over an hour. Worth it! (Words: Matilda Egere-Cooper)

]
Origins of the Afro Comb: 6,000 years of culture, politics and identity is on until November 3rd. For more info, visit: www.fitzmuseum.cam.ac.uk/whatson/exhibitions