Over recent years the culinary arts have hogged the headlines like never before. The development of experimental dining has seen hungry customers have their food hung from string, served up  in complete darkness or arrive in an endless array of unusual forms – snail porridge, sushi dessert, olive oil springs – you name it, they’ve been there. If you are looking for someone to blame for that, here’s your man: Ferran Adria of elBulli fame. The notorious restaurant, nestled in a cove in north Spain, may have closed in 2010 but its influence is still widely felt. Somerset House takes the brave step to give it the space it deserves over the summer months. 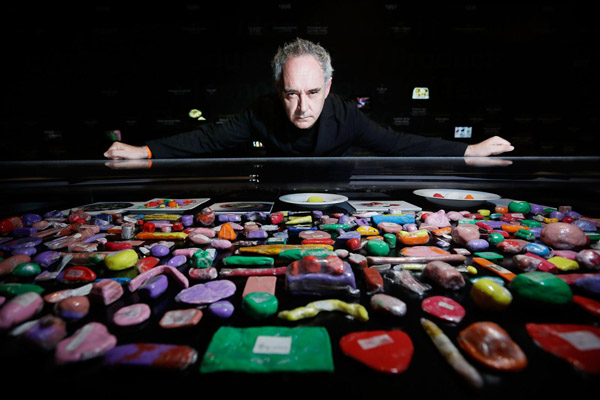 This exhibition brings together the ethos of elBulli and the moment’s legends are made of. Perhaps it’s a surprising decision to host a culinary show in an arts venue? But, this isn’t the first time they have had presented their food on the art stage.
In 2007, the restaurant hosted a stand at the international arts fair Documenta, in Kassel. Its inclusion sparked debate about the kind of artistic disciplines that can be included in the museum. The pavilion transported two people daily to experience the culinary delights in the restaurant in Spain. Their presence also confirmed their position as an institution of the culinary arts that existed head and shoulders beyond its counterparts; a far cry from its humble beginnings as a beach bar in the 1960s.
This exhibition will no doubt add further fuel to this debate about how the culinary arts ‘fits in’. But it will also illustrate the creativity, imagination and talent, not so distinct from artists themselves, of all those have pushed the boundaries of food experimentation. Prepare to feel hungry. (Words: Laura Thornley)
On until 29 September. For more info: http://www.somersethouse.org.uk/visual-arts/elbulli-ferran-adria-and-the-art-of-food

A guide to the 58th BFI London Film Festival: ’71, The Imitation Game and Fury

Something you should see…Apocalypse Now (remastered)