Something you should see… Banksy: The Room in the Elephant

The street artist provocateur Banksy is well-known for his controversial murals, sticking one to the man and always remaining cloaked in anonymity. His socialist values never failed to prevail throughout his work and his name has become synonymous with anti-capitalist propaganda. This new play at the Arcola Theatre explores the story of Tachowa Covington, a local Los Angeles legend, who was the surprising victim in a Banksy graffiti stunt.

As is the fashion with Banksy street art, as soon as it is recognised as a product of his fair hand, the vultures descend. We have seen it here in London at the Poundshop in Wood Green and Tottenham. In a similar vein, during a trip to the Oscars, Banksy sprayed the phrase ‘this looks like an elephant’ on the side of a water tank (which perhaps unsurprisingly, looked like an elephant). Unbeknownst to him, the water tank had been home to Covington for years, a space he had nurtured and furnished, hooked up to electricity and even had his post delivered to. What ensued raises a myriad of questions around what is art, ownership and whose life really matters. 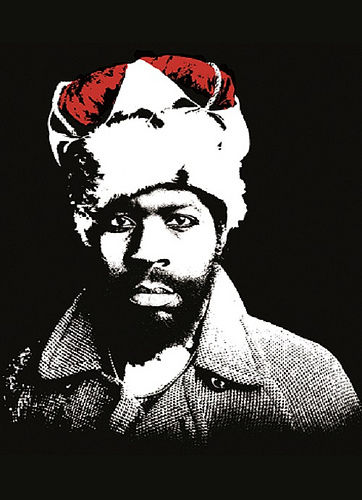 Gary Beadle performs this one-man show: a face and name most Eastender’s fans will recognise. The play is by Tom Wainwright, a playwright from Banksy’s hometown of Bristol. The Room in the Elephant was a complete sell-out during its time up in Edinburgh in 2013 and it now visits the Arcola as part of its national tour. A vital piece of theatre. (Words: Laura Thornley)

On until 26th April. For more info, visit: www.arcolatheatre.com/production/arcola/banksy-the-room-in-the-elephant

Something you should see… George Condo: Mental States

Something you should see…Slice: London – Lahore @ Rich Mix

Something you should see… With A Conscious Eye

Something you should see… Summer Screen Prints: Film Poster exhibition at Somerset House