‘This is not speed dating!’ yells the excitement-inducing message on Facebook. ‘This is about friendship!’
‘OK then!’ I yell back at my computer screen, convinced I’m on my way to meeting my next BFF at this unusual music event.  For the last couple of years, the self-described “music friendship project” has encouraged musical exchanges between Londoners as a quirky way to socialise in the city. Intrigued, I arrive at The White House Pub in Shoreditch a few days later, and immediately start to overheat  (I’m wearing too many layers including my thickest T-shirt and my cosiest hoodie. It’s a blinkin cold night). 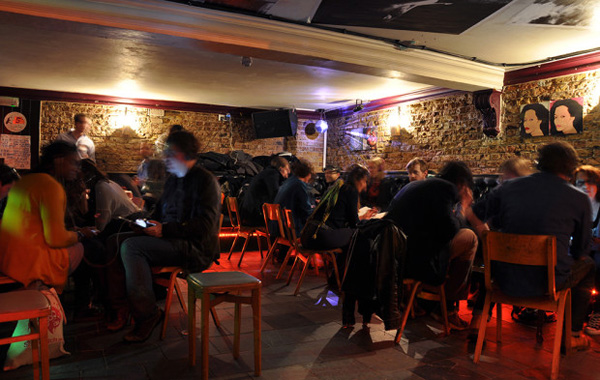 I am greeted at the door downstairs by a man who offers me splendid homemade Guinness-and-chocolate cake. I comment on its moistness which, as an old friend once said to me, is the highest compliment you can give a cake. So how does this all work then? I ask. He tells me you plug your headphones into each others’ players, listen… and maybe make friends. I’m marked with a blue cross and told I will be in the inside of the circle, part of the group doing the moving. Alice, la femme in charge, introduces herself, we share a bourbon, then we’re off.

There are about twenty-five, thirty people – it’s certainly a cosy event, and it all goes off rather nicely in the bijou surrounds and considerate lighting. As for the way it works, each time you form a new pairing you have seven minutes to ascertain your partner’s taste and play something you equally recommend,  like aural sommeliers. As you might expect, each musical tryst varies in its intrigue and compatibility. Sometimes you feel as though you’ve got to endure your partner’s playlist, other times you’re  just getting into it before it’s time to abruptly rotate. 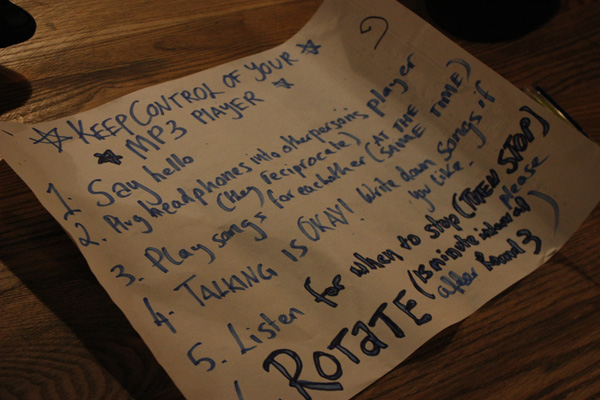 I turn up with the first iPod ever made,  telling people I like repetitive Kraut-inflected psychedelia – cue a few blank looks. During one of my rounds,  the chap I’m talking to, a composer, takes his ears out. ‘This is awful’, he says.  My next mini-epoch is with a young woman who has no power in her player, so she’s forced to listens to my recommendations. When I speak, she removes her earpiece, yells ‘what was that?’ ‘Never mind’ I say. She seems to like it.

What I take from the evening is that I should listen to old Fleetwood Mac, most people like music with beats, The Death Grips and Scorn are a bands I now like and I doubt I have converted anyone to my msucial tastes. But I’ve certainly discovered some new music to investigate further, which makes this a fine little foray for a Thursday evening. (Words: Ed Spencer)

Speed Listening takes place every third Thursday until June.  The next event is on March 21st, but for more info visit: www.thenotewell.com

Somewhere you should go… Lyricist Lounge

Somewhere you should go… Hip Hop’N’Bowl