Somewhere you should go…Field Day and Apple Cart Festival

The Diamond Jubilee is almost upon us and with it, that rare beast – the four day weekend. So how best to use these four glorious days of freedom? Street party? Could be great but it could also mean spending the day with your neighbour (who you’ve never met) bending your ear about joining the local housing committee, whilst politely devouring another’s bloody awful coronation chicken. The Thames Jubilee Pageant? Well, it will hopefully be brilliant but admit it, chances are you’ll be stuck on a very crowded bridge over the Thames, settling for a view of backs instead of boats because a very tall man has got his girlfriend on his shoulders.

Neither bridges nor bunting your thing? Well head out East, to the double whammy that is Field Day and Apple Cart festivals, which are both happening this weekend in Victoria Park. Now in its sixth year (and thus celebrating a Jubilee of its own, albeit the less glitzy version), Field Day is all about the music – it’s the hip electronica one, with an ear-poppingly good line up – Com Truise, The Vaccines, Metronomy (pictured), Afrocubism, Jessie Ware – and these are just the tip of a very cool iceberg. Get lost in the crowds, have a sweaty dance off in a packed tent and glory in the fact that all of East London will be there. 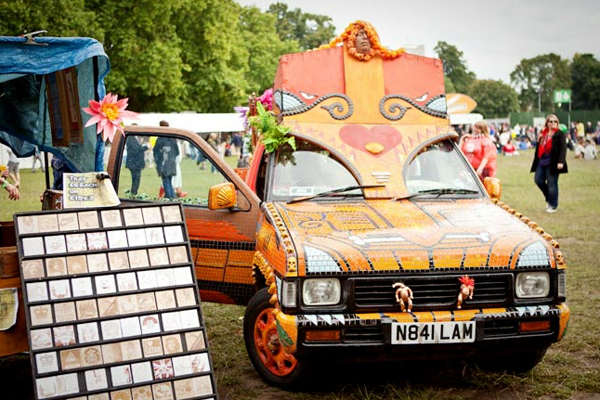 Apple Cart is an altogether more rounded day which goes beyond the music, one for those who like their tunes but who want to feel free to just wander, not pressured to race from tent to tent in the hope of catching Jamie XX. Noah and the Whale are headlining, current songstress of the moment Lianne La Havas will be on stage and everybody’s favourite world music DJ, Gilles Peterson will be on the decks. Beyond the music, be sure to check out the comedy stage featuring the likes of Miles Jupp, Sean Lock and Josie Long. Once you’ve recovered from laughing so much you’ve almost peed yourself, make your way to the cabaret stage for some good ol’ fashioned entertainment, having made sure to stop by the Art Car Boot Fair stalls (pictured)  to learn “The Art of Flirting and delivering Compliments and Flattery in abundance” from the Pretty Boys. That should stand you in good stead for the rest of the night.

So go to one or both, if you’re feeling extravagant, heck, it’s not like you haven’t got two days to recover. (Words: Jane Duru)

Somewhere you should go…Museums at Night 2011

Something you should do… have a ‘wish list’ day