It was only a matter of time before the Mexican wave that gripped the city some years ago – before dissolving into an endless amount of street food trucks and quickie burritos – would get its groove back. And unsurprisingly, it’s happened in Shoreditch. Casa Negra is the younger sibling of Soho’s La Bodega Negra (inspired by New York’s super-hot La Esquina) and in a similar vein, seeks to offer genuine Mexican food with a stylish sensibility for a hip kinda crowd. Menus are designed to look like indie magazines, staff are equally handsome and pretty and we soon discovered after ordering a round of tacos and mains that the food looks too gorgeous to eat. But we didn’t hesitate to chow down on the delicious lengua (braised beef tongue, onion and coriander taco), pescado (grilled sea bass, chipotle, jalepeno and cabbage taco), and the zanahorias en Mole Negro ensalada (roasted sweet carrots, black mole, watercress, pineapple vinigrette) to kick us off. 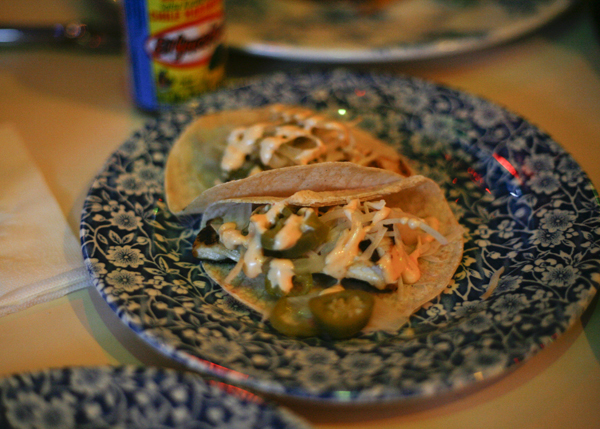 We then followed this up with the recommended chochoyotes con pollo – it’s a hearty and tasty dish made up of masa dumplings, shredded chicken, pasilla chilli salsa, ranchero cheese and crema, and doesn’t need any additional sides to make it meal. That said, it was worth enjoying the arracherra con salsa habanero (grilled skirt steak, habanero ajonjoli salsa) with the chilito (cabbage, jalapeno and morita chilli slaw) and a tamale for good measure. It’s a modest portion, the steak, but compliments to the chef all the same.  As for THAT tamale,  I’m holding back the urge to throw down every kinda of hyperbolic statement to show my appreciation for the tamales de maiz verde, cooked in banana leaf and ranchero cheese, because my God, it was amazing. Fluffy, buttery…it practically melts in your mouth and makes for a worthy accompaniment as they’re only £3 a pop. 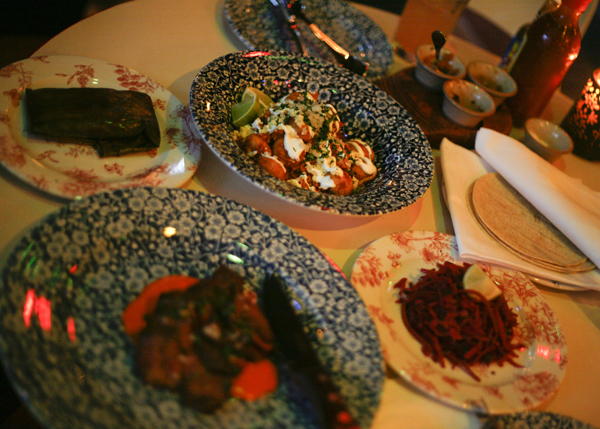 Moving onto desserts, there are only four dessert options at the moment (and the taco de chocolate we were hoping to try wasn’t available), but the alfajores – vanilla cookies with a homemade dulce de leche and toasted coconut – worked well with a cup of fresh  mini tea, while the flan de naranja (egg custard, caramel, orange) also didn’t disappoint.

It wouldn’t surprise me if Casa Negra becomes one of those spots that’ll need a waiting list to manage all the attention it’ll be getting from the locals (especially as a basement club is on the way).  The food and drink are well priced and the ambience is quirky yet classy, so visit sooner than later to experience a Mexican restaurant with a difference. (Words: Matilda Egere-Cooper)

For more info, visit: www.casanegrarestaurant.tumblr.com. Click here to check out more photos from our recent visit.

What we’ve been up to… Fire and Feathers

Something you should do… Winter at Southbank