Something you should see… Joyce Pensato: Joyceland

Paint splattered Mickey Mouse toys lace the huge studio of Joyce Pensato and act as inspiration to her larger than life portrait paintings: although her style is a far cry from the Disney Technicolor days. Often working in black and white and adopting a drama more akin to the daubs on The Jokers face, Pensato’s work evokes a disturbing undercurrent for these usually loveable faces.

Working in Brooklyn, New York, her inspiration comes from her surroundings: a hand painted sign or a piece of graffiti. She works mostly in shop bought enamels and charcoal, embedding a throw away aesthetic within her work. Her preoccupation with the caricature makes her work unmistakeably American and a not so distant relation to the pop art scene, although the artists prefers to think of her inspirations as Giacometti and the Abstract Expressionists. 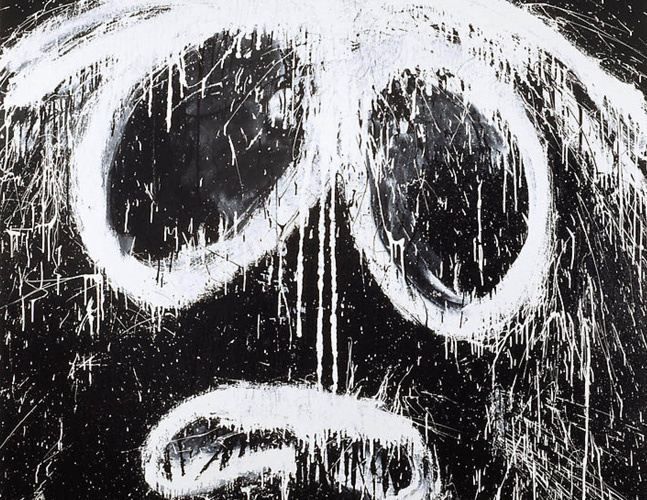 Her first solo show, I Killed Kenny started its tour in 2013 in Santa Monica Museum of art and continued to further venues throughout the States. Pensato’s exhibition at Lisson Gallery this March will be her first major exhibition in the UK. In 2012 the artist was awarded the Merit Medal for Painting, given by the American Academy of Arts and Letters as well as other awards from the Guggenheim and Pollock-Krasner Foundation.

As part of her first show in London, the artists will be transporting her studio, otherwise known as, Joyceland, complete with plastic action men, paint pots, scraps of paper and all other paraphernalia that results from her painting methods. The artist will also be creating a site-specific mural along one of the gallery walls, during the month before the exhibition. (Words: Laura Thornley)

The exhibition is on at the Lisson Gallery from 26 March – 10 May. For more info visit: www.lissongallery.com/exhibitions/joyce-pensato

Watch a video of Joyce Pensato in New York  discussing her work via the Nowness website.

My weekend in pictures: November 21