For some, Ibiza may evoke scenes of 18-30s mayhem, sunburnt skin, jelly shots and deportation orders but that isn’t the only crowd that have been drawn to this magical place. For reasons beyond any pragmatist’s understanding, Ibiza has attracted freethinking alternatives for decades: hippies, political dissidents and loaded seafarers. Whether it’s down to its beauty, the ethereal sunsets or the indescribable ambience that so often remains with its visitors, Ibiza enchants all those who walk its land. 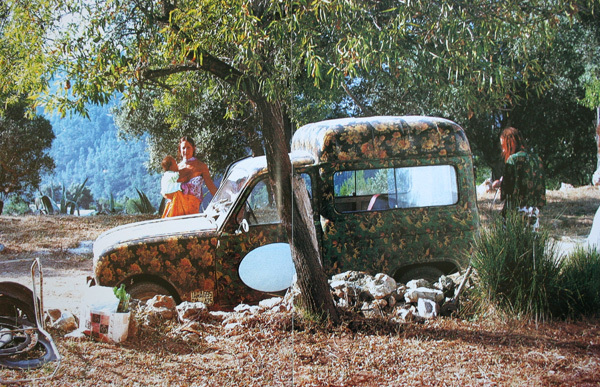 This intimate exhibition in the reading room at the ICA traces the events on the island in the early 80s. It was the moment when dance music really took hold, home to three of the worlds most influential clubs:  Pacha, Amnesia and Ku. Their outlandish reputation was all thanks to the hippie’s influence who had been paving the way for alternative lifestyles and developing a party style that can only be shown way beyond the watershed. It’s also a time when four young British DJs would travel out on a week’s holiday, only to return and write the UK’s rulebook on acid house.

Two relatively unknown artists feature in the exhibit – Yves Uro, a graphic designer who drew most of the posters for the nightclub Ku and Armin Heinemann, owner and designer at the boutique fashion store Paul’s Ibiza. Their work inspired a generation, globally, but was only ever intended for the local audience. The exhibition will also show previously unpublished photos from the club Ku.

Interestingly, 2manydjs have had a hand in the curation alongside IDEA books and the Wild Life Archive. You may have missed the closing parties for this year but this will no doubt get you in the mood for the coming season. (Words: Laura Thornley)