What we’ve been up to… The Art of Rap concert, Hammersmith Apollo (July 19th)

As they say in the US, “game recognises game” – and hip-hoppers rarely hesitate to bestow honour upon its pioneers for teaching those next in line a thing or two – and the new kids who are doing it so well. So there’s moments tonight when, despite being age-mates, Public Enemy’s venerable Chuck D pays tribute to the legendary Melle Mel, calling him “teacher” (“You snatched the pedal out of my hand son!” Mel shouts back, beaming). Later, the PE frontman nods like a proud dad as he watches fellow New Yorker Raekwon take his turn on the mike – and when the latter introduces “the man of the hour, my brother, your brother” Ice-T, you can’t help notice the smallest gesture of respect. They’re an unlikely quartet, each representing a unique period in the genre’s chequered evolution – but they show that when hip-hop comes together in one accord, it’s a beautiful family affair. 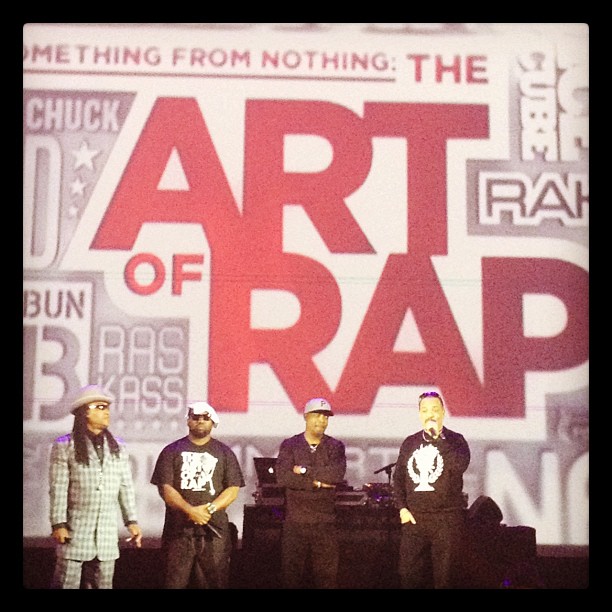 On the surface of it, this brief 45-minute gig is just a plug for Ice T’s new hip-hop memorial Something from Nothing: The Art of Rap, but it has its merits. They’re all zealous ambassadors for the part they’ve played in the scenes 30-odd year story, with Melle Mel’s being the pimp of the party, rocking the hat and suit to match. As the first act of the night, he starts us off with the obligatory call and response, before energetically laying into his famous hit The Message then skilfully reeling off the opening lines from songs by Kurtis Blow, Rob Base and DJ E-Z Rock and even Naughty By Nature. He then finishes off with a snippet of his guest spot on Grandmaster Flash’s White Lines before demanding the hyped crowd to say “yeeeeeeeeeeea!”.

He’s followed by Chuck D – who as the political elder statesman always makes Fight The Power sound relevant, and delivers new song I Shall Not Be Moved, a vitriol targeted at the present state of society. He’s more of a languid performer Chuck, so when Wu Tang’s Raekwon bounds onto the stage 10mins later, with a surprise appearance from his colleague Ghostface Killah, it feels like the crowd is treated to a mini-concert, and roars their appreciation accordingly. A performance of C.R.E.A.M by the younger pair is the riotous centrepiece of the night – that is, until Ice-T steps onto the stage near the end of the proceedings, with a set which proves he’s still as gangsta as he was in the 90s. When he raps “I’m an old school nigga, graying hair…still have you killed from a wheelchair”, you can’t help but believe him. By the end, we’re treated to a surprise performance from the UK’s Hijack – a Brixton MC from back in the day – and a new song from Ice-T, making tonight feel like one of those proud reunions that should happen in hip-hop more often – and hopefully off the back of his new doc, they will.

Something From Nothing: The Art of Rap is out in selected UK cinemas today.

Somewhere you should go… Afrobeats Music Festival at Camden Crawl