What we’ve been up to… Nebraska (London Film Festival)

It’s hard to find a contemporary filmmaker that can rival Alexander Payne’s enviable skill of transforming regular trips into deeply emotional journeys. With films such as About Schmidt, Sideways and The Descendants, Payne has received warm critical reception and has gained major awards, including two Oscars for best writing. And with Nebraska (a perfect choice for this year’s BFI London Film Festival’s Journey Gala) he is at the top of his game. 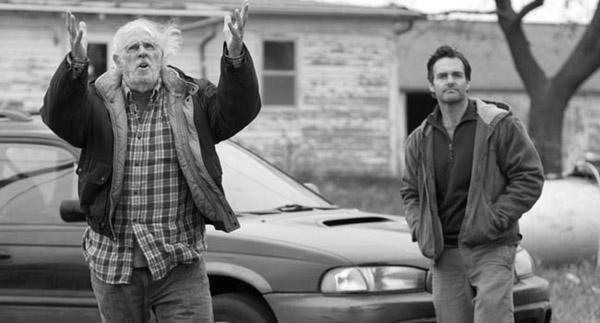 The plot revolves around a trip from Montana to Nebraska that David Grant makes with his father Woody, a forgetful old boozer who believes that he has won a million dollars in a lottery and wants to collect the money in person from the company’s office. The first part of the film may feel a little bit slow as David repeatedly tries to persuade his father that the whole thing is a hoax before finally succumbing to his wish and thinking that a trip with his old man will be a good way to spend some time together. However, from the moment they decide to make a pit- stop at the town that Woody grew up in, the film reveals its rich emotional core. As we meet Woody’s estranged family and his old friends and foes we, along with David, get an illuminating look at his father’s past and start to realise how he became the man that he is now. In the meantime, aided by a beautifully written script by Bob Nelson and the wonderful black-and-white cinematography of Payne regular Phedon Papamichael, Payne once again shows his knack for making us care for regular folks and laugh with them not at them, painting a portrait of the small-town Midwest that brings in mind the warmth of Frank Capra and the wit of Preston Sturges.

It would be fair to say though that the emotional power of the film mainly comes from the terrific performances of the two main leads. Veteran actor Bruce Dern shines in a role that deservedly gave him the Best Actor Award in Cannes and will hopefully earn him an Oscar too. Meanwhile,  Will Forte, who is more famous for roles in madcap comedies like 30 Rock feels totally at ease in a more dramatic role. In fact their chemistry is so good that by the end of the film you will feel that rare knot in your heart. If you are looking for a film to watch with your old man (regardless if he may have a drinking problem or not) Nebraska is the perfect choice. (Words: Apostolos Kostoulas)

Nebraska was screened at the 57th BFI London Film Festival and will be released nationwide on December 6th.

Something you should see… To Kill a Mockingbird

Something you should see… Damien Hirst: The Complete Spot Paintings 1986-2011

Something you should see… Kara Walker at the Camden Arts Centre