Something you should see… Yinka Shonibare: POP! at the Stephen Friedman Gallery

Yinka Shonibare is having a bit of a moment. Fresh on the heels of a major retrospective at the Yorkshire Sculpture Park, the Stephen Friedman Gallery is hosting a show of new works by the British-Nigerian artist. Inspired by the financial crisis, the exhibition explores the subjects of corruption, excess and debauchery. With his characteristic humour, Shonibare critiques society’s obsession with luxury goods and the behaviour of the banking industry.

Shonibare’s lavish re-working of Leonardo da Vinci’s The Last Supper,  described as his ‘largest and most complex sculptural tableaux’,  is one of the main pieces of the exhibition. In Shonibare’s fantasy, Christ is replaced by Dionysus – the mythological God of fertility and wine – surrounded by twelve over-indulged disciples in various states of sexual abandonment. The celebration of mindless excess continues in Banker (2013), which depicts a sharply dressed mannequin simulating a lewd act with a champagne bottle. 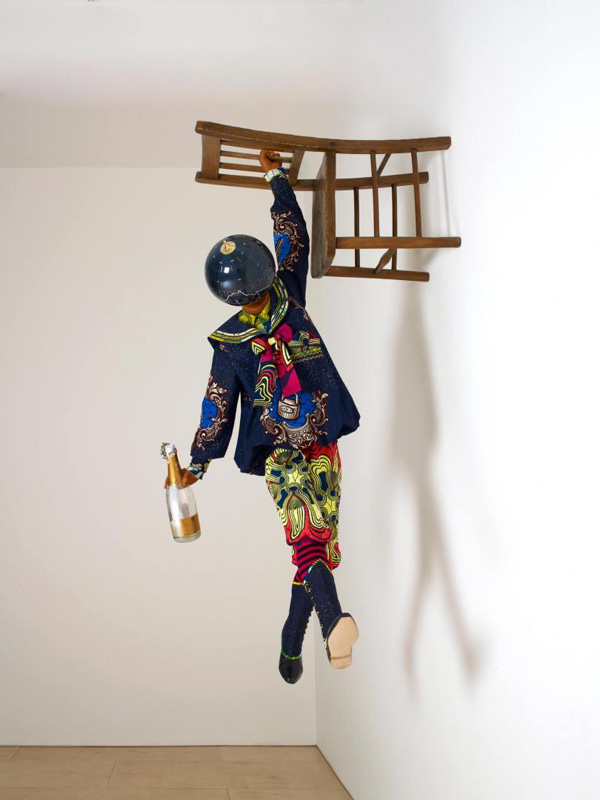 Headless figures and the use of Dutch waxed fabric are common motifs in Shonibare’s work. Throughout the exhibition, the colorful Batik print is used in the tailored costumes of the figures and the cloth also appears in the installationToy Paintings. Manufactured by the Dutch, and initially for sale in Indonesia, it was only after the textile failed to take-off that it eventually made its way to West Africa. A signature of his practice for nearly two decades, Shonibare’s use of ‘African’ material  – that is actually European in origin – plays on its rather complex colonial history. The beheaded figures are an attempt by Shonibare to discourage associations with race on the part of the viewer.

Large-scale self-portraits based on Andy Warhol’s Camouflage series of 1986, which represent new lines of enquiry for Shonibare, also deserve a mention amidst all the decadence and depravity on show. Yinka Shonibare is of course the man behind the widely acclaimed Nelson’s Ship in a Bottle, commissioned for the Fourth Plinth in Trafalgar Square – and now on permanent display at the National Maritime Museum. Shonibare’s new work should resonate with audiences, losing none of its theatre, colour and style  in its witty and damning take on contemporary life. (Words: Eri Otite)

Yinka Shonibare: POP! is on at the Stephen Friedman Gallery, from 16 March – 20 April. For more info, visit www.stephenfriedman.com

Somewhere you should go… The Vault Festival