Something you should see… One Monkey Don’t Stop No Show

Don Evans was a key figure in the Black Art movements in the 1960s and 70s, a founder member of the Black Theatre Network and the African Grove Institute for the Arts; he wrote and produced plays that detailed the African-American experience of that time. But since his plays didn’t make the leap over the pond, chances are, he may be new to you? Over 30 years since its first showing in the States, One Monkey Don’t Stop No Show finally gets its UK premiere – who better to take on the production than the only black-led UK touring theatre company, Eclipse? 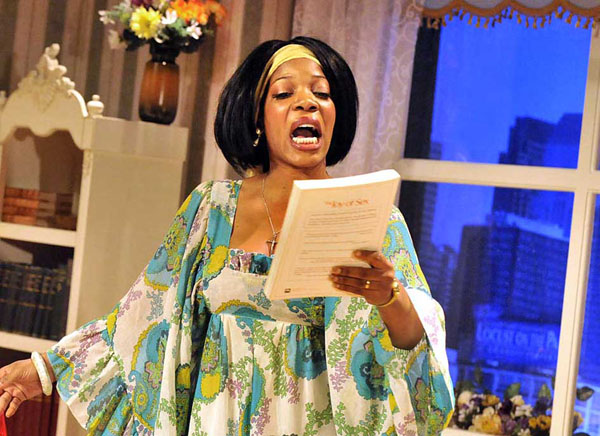 Based in Sheffield and with a production list dating back to 2003, the Eclipse Theatre Company are breathing a breath of fresh air into Evans play. Re-imagining the play in throwback 1970s sitcom style – complete with canned laughter, a retro soundtrack and ‘on air’ sign – the play has become more knowing and self-aware. Luckily this gives a slightly more up-to-date angle on the stereotypes in the original; the preacher father and his middle class family, the honey-tongued Jazz club owner and the naïve niece from the Deep South.

The play has been on tour since September and has been received well throughout. The London stop is at the Tricycle Theatre and will be the first under Indhu Rubasingham, the new artistic director. The cast stars Jocelyn Jee Esien, who still remains the only black woman to have her own comedy show in the UK, (Little Miss Jocelyn) and Karl Collins, who starred in the recent film Attack the Block (2011). Whilst Eclipse’s mission is to raise the profile of black British theatre, they have also created a hilarious reworking of Evan’s play and since comedy can be a great catalyst for change, this is a vital piece of theatre. (Words: Laura Thornley)

Something you should see…Ron Arad’s Curtain Call, Roundhouse

Somewhere you should go… Battle of Ideas 2013